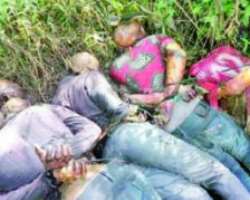 (Intersociety Nigeria: 18th June 2018)-On 4thJune 2018, we released the first part of this report exposing and detailing how the authorities of the Nigerian Army, joined by the Defense Headquarters of the Nigerian Armed Forces authorized, carried out and supervised the massacre of no fewer than 150 unarmed and defenseless pro Biafra activists and other members of the Nigerian civilian population of Southeast and South-south extractions. No fewer than 130 other defenseless citizens were shot and maimed in three locations in Abia State; with Afara-Ukwu recording the highest number of the maimed. The link to the first part or part one is here: http://www.intersociety-ng.org/component/k2/item/334-2018-06-04-10-54-33

The Army massacre operation was carried out under the guise of “September 2017 Nigerian Army Python Dance 11 in Southeast Nigeria”. Mr. President, who is also the Commander-in-Chief of the Nigerian Armed Forces, personally authorized the massacre operation; executed by the Chief of Army Staff, Lt Gen Tukur Yusuf Buratai and backed by the Defense Headquarters.

It was further discovered that not more than 15% of the bodies of the slain were recovered and interred by their families while the rest were picked by soldiers of the Nigerian Army and taken to undisclosed locations where they must have been buried in shallow and mass graves-a pattern that had been consistently used by the Army since August 2015 when the violent crackdown on unarmed and defenseless pro Biafra activists was launched by the present central Government of President Muhammadu Buhari .

The manner and pattern of killing of eight unarmed pro Biafra activists whose lifeless bodies were found in one of the bushes in Umuahia days after the Afara-Ukwu Army massacre of 14thSeptember 2017; clearly showed that some bodies of those killed at massacre arena were forced to be buried in secret locations by their arrested colleagues who, after burying their slain colleagues at gunpoint, got tied, blinded and shot dead within the secret locations where their slain colleagues were forcefully buried. The eight bodies found in one of the said bushes had had their hands tied behind their back with marine rope and possibly blinded before being shot dead to erase traces of culpability or accountability of the culprit soldiers. Technically, it is an act of impossibility to tie or chain or rope a human body after he or she had been killed.

Owing to threats of invasion, violence, death or arrest, detention and torture by soldiers and police SARS operatives; most families and friends or associates of the slain are forced to keep perpetual mute over their “missing” loved ones. These have also forced them into mourning the slain in acute silence, shock, frustration, anguish, sorrow and anger. Some of them willing to seek justice including open inquiries over the whereabouts of their loved ones are hampered by teething poverty level in the country. Totality of these has further resulted in untimely death of some of them while scores of others have become victims of traumatic disorder and post traumatic stress disorder. Many children of the slain victims investigated recently by our organization are either out of school or relocated to sub standard children’s schools. Some are barely fed with three meals per day.

No fewer than 60 pro Biafra activists and other members of the public were arrested by soldiers and police in Abia State and arraigned for terrorism and other related charges. They were all arrested during and immediately after the Army massacre operation in Afara-Ukwu, near Umuahia and later arraigned on 18th September 2017 before an Umuahia Magistrate Court via Charge Nos 11/670 C/2017 (CP, Abia State vs. Ogbonnaya Orji & Ors and 11/676 C/2017 (CP, Abia State vs. Chinonso Kalu & Ors).

Also as at April 2018, no fewer than 87 pro Biafra activists were languishing in various prisons located in Rivers, Abia, Anambra and Enugu States and-among them are 15 detainees at Port Harcourt Maximum Prisons, 20 at Ahoada Prisons and 10 at Degema Prisons all in Rivers State. Others are one detainee with a severe eye injury at Amawbia Prisons in Anambra State; 33 detainees including minors and one Ms Ada Nnude (a female detainee) at Aba Prisons in Aba State and 4 detainees at Enugu Prisons. More pro Biafra activists have also been arrested since then and arraigned in magistrate courts on grievous phantom charges from where they are dumped in prisons as “awaiting trial inmates”, while the whereabouts of scores of others arrested and taken into police and military custodies have remained unknown till date.

I am--, and 49yrs old voluntarily retired serviceman and resident of--, in --LGA of --State. I hail from—community in –LGA of --State.

On 14th September 2017, I was at Umuahia in Afara-Ukwu Ibeku (Nnamdi Kanu’s house) with other subordinate volunteers I came with from--, who work under me in our group’s Emergency Management Volunteer Section, which I happen to be a key official. The subordinate volunteers that I came with from-- are Okwudiri Obika, Ogbogu Okoro, MaCois Palibor and Chigozie Ikechukwu. I am also one of the principal officers in our pro Biafra Independence group.

As one of the principal officers of our unarmed and nonviolent group, I was inside the palace of Nnamdi Kanu’s father, and at about 3.26pm same 14th September 2017, we started hearing sounds of military shooting. On account of my Service experience, I instantly recognized or detect the kinds of weapons used in the shooting which included AK-47 and AK-49 rifles, special machine guns; the AA type apart from armored tanks. I later picked and preserved some of the bullets I found on the shooting and shelling arena and they are still with me as we speak.


As a result of the sounds of guns we heard we all rushed out of the Palace and on reaching the Palace Gate, behold dead bodies of our slain comrades had littered everywhere around the Gate. But because live bullets were raining everywhere, I had to take cover by jumping inside a protective corner from where I observed the goings on. From where I was, I sighted no fewer than six dozen or 72 corpses of our slain comrades as they were being picked by soldiers and dumped inside dozens of their Hilux vans.

It was in the process that I managed to come out from where I was taking cover owing to my Service or military background and experience; in search of the four guys I came with (MaCois, Okwudiri, Ogbogu and Gozie); but I could not find any of them alive. Because of the commotion, confusion and terror in place, everybody was running helter skelter and in different directions. The situation got so bad and out of hand, forcing me to run and take a different direction within.

It was at that point that I saw one of my good friends, Anayo Anyanwu in the pool of his own blood and I had to lift him and escape with him from the shooting scene. With the help of others, he was taken to the Federal Medical Center (formerly Queen Elizabeth Hospital), Umuahia, where he later died after an unsuccessful surgery to extricate some bullets that pierced and penetrated his sensitive body parts. Late Anayo Anyanwu was shot at his back three times and the bullets pierced and lodged at his heart region. Doctors at the FMC managed to remove two of the three bullets and he later died same day (14thSeptember 2017) around 9.45pm.

After admitting late Anayo Anyanwu at the FMC, Umuahia, I had to rush back to the shooting and killing scene and on reaching there, I saw the dead bodies of my cousin Okwudiri Obika, Onyekachukwu Ujam, Henry Ogadi Ogoyi and another with unknown identity. I had to drag their bodies one after the other with the help of courageous others to a hidden place inside a nearby brick structure to prevent them from being picked by soldiers as was the case with dozens of others.

I also covered them with plantain leaves to preserve them till next morning and in the early morning of 15thSeptember 2017 we arranged and took their corpses to the FMC Mortuary in Umuahia. The four corpses were also pictured and videoed and in my possession till date; likewise those I shared them with. I could not till date set my eyes on the trio of MaCois Palibor, Ogbogu Okoro and Chigozie Ikechukwu, all of whom were my boys I travelled to Afara-Ukwu Ibeku in Umuahia with from--. It is most likely that they were among those shot and killed by soldiers with their bodies taken away on 14th September 2017.

What took place at Afara-Ukwu on 14th September 2017 was better seen than imagined. It was a clear case of genocide by genocidal soldiers acting on a cleansing script from their COAS and C-in-C as the shouts of “kill the pigs” rented the air throughout the shooting hours of the massacre operation. I noticed during the shooting and killing that almost all the soldiers involved removed their service badges, names and numbers; except one of the shouters of “kill the pigs”, who I was able to identify via his military badge as “Utsman Mustafa”. He also had or bore a tribal face mark by the left side of his face and a dark spot on his forehead.

The corpse of my late cousin, Okwudiri Samuel Obika was retrieved from the FMC Mortuary, Umuahia on 2ndJanuary 2018 and interred same day in his hometown,-- in--LGA of --State. He was the only son and an orphan which was why I took him into my care as part of my family. Some bodies of our slain comrades were also hurriedly removed from Umuahia and environs and relocated by their families and friends from mortuaries where they were initially deposited and re-deposited in undisclosed mortuaries from where they were retrieved, taken home and buried off records to prevent being traced and taking away by soldiers of the Nigerian Army.

We demand justice over the killing by Nigerian Army of my late cousin, Okwudiri Samuel Obika and our unarmed and defenseless members in their hundreds in Umuahia, Isiala-Ngwa and Aba. The justice under demand must include the arrest, prosecution and conviction of those who ordered, supervised and carried out the killing and maiming.