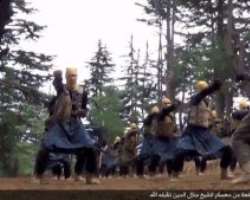 Leaders of Islamic State (IS) are sneaking battle-hardened extremists from Syria into Nigeria, UK Sun reported Monday, saying some of the fighters are reportedly sent to the Middle East for training in a “chilling exchange programme”.

Muslim fundamentalists massed in the Boko Haram sect had held Nigeria by the jugular since 2009, maiming and killing thousands of people in the North-east of the country in particular.

The involvement of the IS in the local terror sect had always been suspected and following a split in 2016, a faction of the group led by Abu Musab al-Barnawi, pledged its allegiance to IS, taking up the name ISIS West Africa.

Although the tabloid said the insurgents were trained for possible attacks in Britain, it quoted sources as saying the strong links between Nigeria and the UK will make it easier for IS to send its killers to Britain.

Efforts to get reaction from the Defence Headquarters Monday were futile as the phones of defence and army spokesperson, Brig-Gen John Agim and Brig-Gen Texas Chukwu, did not connect.

But the report was emphatic that: “It is feared IS will exploit regular flights between Lagos and London to export more evil to the UK.”

It quoted one Group Captain Isaac Subi of the Nigerian Air Force, who has been fighting terrorism, said IS has an exchange programme of fighters.

“They come and train their fighters here and some of our insurgents too are granted access to their training in Yemen and Syria, acquiring those skills and they come back and teach others,” he said.

“They have their exchange programme of fighters. Their poisonous attack has already ended in horror attacks on British streets.”

Subi added that the lack of secure borders across Africa also makes it easy to spread the bloodshed.

“There are hundreds of fighters. It's a virus that spreads across our borders. Their action leaves trails of blood and tears and sorrow,” he added.

UK Sun said at least 150 British troops are conducting counter-terror training with Nigerian forces in an attempt to stem the bloody tide, and stop IS taking hold in the region.

Britain's Defence Adviser in Abuja, Charles Calder, said ISIS could be a threat to the UK mainland if unchecked.

“In time, unchecked, it could present a threat to both UK interests and conceivably the UK mainland,” Calder said.

“Sending small, handpicked teams out to military training hubs across the country was the best way to prevent Nigeria from collapsing.

“Brits has so far trained 35,000 military personnel in Nigeria and commanders say they are now performing better on the frontline.

“The UK has teams training Nigeria's air force, army, naval special forces and the equivalent of the SAS.”