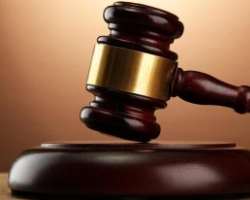 A Yola State High Court presided over by Justice Abdul-Azeez Waziri has sentenced five men to death for  culpable   homicide  and for killing a Fulani herdsman.

According to a report by Bodedolu Reports, the  convicts are  Alex Amos, Alheri Phanuel, Holy Boniface, Jerry Gideon and Jari Sabagi of Demsa Local Government Area of Adamawa State.

The report said they are facing the  hangman  because according to Justice Waziri, they were found guilty of criminal conspiracy and culpablehomicide which contravened Section 96 (1) (a) and Sections 79 and 221 (b) of the  Penal  Code of Laws of Adamawa State, 1997.

The convicts were said to have on June 1, 2017 at Kodamun village in Demsa local Government Area willfully and intentionally conspired and attacked three herdsmen rearing cattle, killing one of them, Adamu  Buba , whose body they threw into a river and also maimed several cows.

Justice Waziri said the case against the accused persons had been  proved  beyond reasonable doubt by the counsel to the state, Mr. Salihu Mohammed.

Justice Abdul Azeez  ruled  that, “I hereby sentence the accused persons on counts one and two to death by hanging, while on counts four and five, I sentence the accused to three years in prison to run concurrently. “Any aggrieved party is at liberty to file an appeal to the Court of Appeal, Yola  Judicial  Division within 90 days from today.”

Investigation  further revealed that the five Christians had suspectedly attacked late Adamu Buba who was one of the ring leaders who attacked their village in 2016 and killed 48 persons.

As part of their reprisals against Fulani herdsmen who had burnt down their village of Kodamun in which 48 persons were killed, mobilised and chased Buba to a nearby river and he felled into the river but got drowned as he could not swim .