Ahead of 2019, members of new party take “deadly oath” to be upright or die 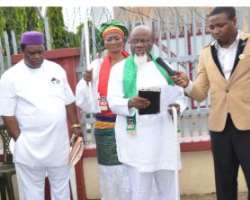 Ahead of the 2019 General Elections, executive members of the Justice Must Prevail Party (JMPP) on Thursday, swore to an oath to remain upright in all their dealings or die.

in order to deliver the country from its current situation.

The Party which is said to have been formed based on the vision from God, pledged to wrestle power both at the National and state levels through the activities of upright members.

To hold its members accountable, the Party led by the Chairman of the Board of Trustees and former Governor of Anambra State, Chief Chukwuemeka Ezeife and the party chairman, led other party leadership to take a “righteous Deadly” oath.

The Oath which employ three ordinances of the Earth, the Sun and the Blood, stipulates that any member who takes it and goes against its tenets will die.

The oath according to the party requires party members to remain upright, as any act of corruption after taking the oath will spell death for such party member.

Party members who want to take the oath are required to stand bare foot on the sand, holding on to the Holy Book or looking at the sun and then take the oath which will be sealed by a cleric. Some other members of the party who led in taking of the oath are: National Chairman of the Party Amb. Olusegun Iyagbemi and former presidential aspirant, Sarah Jubrin.

While delivering the maiden press conference of the party, the chairman, Amb. Olusegun Iyagbemi said that many other parties have signed social contracts with Nigeria but failed.

“JMPP is not a Party of promises. IMPP's social contract with Nigeria and Nigerians is based on covenant.

“Political promises produce politicians who have no respect for true God but engage in all manner of evils.

“Political covenants produce leaders, who by Righteous Deadly Oaths, connect themselves to the true God and therefore hold themselves out as eternal collaterals for the betterment of Nigeria and Nigerians.

“This is so because promises can fail but covenant cannot be broken. Without controversy, covenant is superior to promise!

“By the Covenant of 12 Pillars of Oath of Justice that holds the Peace and destiny of Nigeria, we involve the true God in our government and give room for Priests and Imams to be part of the divine direction in government,” he said.

The pillars of the oath include:
1 shall not steal any party or government funds or resources from one Naira upwards.

I shall not collect any gift that will influence my decisions while serving in office as JMPP official.

1 shall not give or receive bribe or engage in any sexual harassment, homosexuality or lesbianism.

I shall not award any contracts to myself or personal company directly or indirectly.

I shall not attack any church or mosque, Christian or Muslim, either directly or indirectly by inciting words or instruments.

I shall not engage in any diabolic acts.
I shall stand for justice for all the tribes and ethnic nationalities in Nigeria, and also stand for zonal rotation of the Offices of the president and that of the governor on the basis of one tenure of six years.

1 shall serve for one tenure in my present Office.
I shall not take jMPP or any member of the party to court before, during and after elections as a result of party electoral matters.

I shall not engage in any form of sabotage against the party and the government.

I shall not engage or be involved in any form of kidnapping activity in Nigeria.