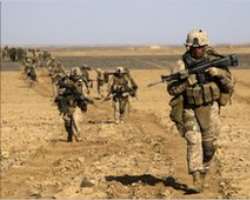 A Nato-led operation in Helmand lasted longer than expected

The top Nato commander in Afghanistan says a military operation to drive militants out of Kandahar will move at a slower pace than planned.

“I think it will take a number of months to play out,” he told reporters.

Meanwhile, Afghan officials are seeking to confirm reports that a seven-year-old boy was publicly hanged by the Taliban for alleged spying.

Afghan President Hamid Karzai said that if the report was true, “I don't think there is a crime bigger than that that even the most inhuman forces on Earth can commit”.

The hanging is reported to have taken place in Sangin district in Helmand province on Tuesday.

Continued violence
Nato has said that taking control of Kandahar will be the key to reversing the momentum of the Taliban in Afghanistan.

Gen McChrystal did not specify any time-frame for the offensive, but US forces had planned to start the Kandahar operation this summer.

“It's more important we get it right than we get it fast,” Gen McChrystal added.

Nato has hailed as a success a campaign launched earlier this year in neighbouring Helmand province, but locals report continued violence.

The Taliban have been waging a battle to overthrow the US-backed government and expel the 130,000 foreign troops there.

UK Prime Minister David Cameron is in Afghanistan for talks with President Hamid Karzai, in a week in which nearly 20 Western soldiers have been killed fighting the militants.

Last week, Afghanistan held a national peace council. Delegates invited by the president endorsed a plan to seek peace with the Taliban, who did not attend.