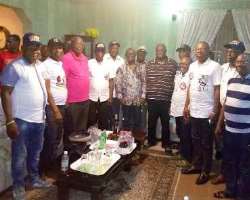 Former Secretary to Delta State Government (SSG), Comrade (Chief) Ovuozourie Macaulay, has declared support for the re-election bid of Senator Ifeanyi Okowa ahead of the 2019 general elections, with a call on Isokos to do same.

He assured Ogidi, that the Isokos could not afford to vote against Okowa, in the forthcoming election.

Macaulay called on Isokos to support Okowa again for a second term so that Delta North would support Isoko for governor in 2031.

He said, “We the Isokos are ready to give Okowa a second term. Anything away from that will disrupt the arrangement. I will like to see an Isoko Governor in my life time. At 70,I will not contest Governorship. Isokos cannot afford to be on the wrong side of political history. Let's unite to get it Right.”

“In 12 years’ time, I cannot aspire to be a governor because it will not be fair to my followers. Isoko must do deep calculation to stay afloat. Isoko leaders must stop the politics of pull him down and build capacities. In the fast approaching 2019 election, we must beat that mark of 67,000 votes of 2015. Okowa have to win and win very convincingly. That should be our mission." Macaulay stressed.