....Tasks Him To Conduct Free Polls in Ekiti, Nigeria.
By Adeoye Adelaja 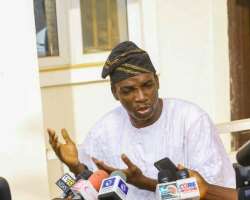 The candidate of the Action Democratic Party (ADP) in the forthcoming Ekiti governorship election, Otunba Segun Adewale has commended President Muhammadu Buhari for recognizing late MKO Abiola, conferred him with the award of GCFR and for declaring June 12th as the democracy day.

Buhari had on Wednesday honoured the late business mogul, whose struggle and sacrifice is attributed to the return of democracy to Nigeria.

Speaking on the honour to late Abiola, Adewale while receiving delegations from various local governments in the state, hailed the President's declaration, pointed out that late Chief MKO Abiola died in the struggle for the emancipation and freedom of the people, he said the declaration amongst other things has brought back relief to the children and other families of late MKO Abiola.

Adewale also said, Buhari recognition of MKO Abiola has given hope to comrades who have been at the fore front of the struggle. The Ipoti-Ekiti born entrepreneur who observed that Abiola's sacrifice eventually gave birth to the democracy we are all enjoying today, encouraged everyone to embrace role that will sustain the country's democracy.

He stressed further that while we are still in the process of making our democratic government work, we must also commend those who have help us get to where we are today. Adewale said for the holiday and the award to take meaningful effect, the legislative arms of government must be carried along to effect all necessary constitutional adjustments.

Adewale, however, charged President Buhari to consider the efforts and sacrifices of those who laboured hard to enthrone democratic rule by conducting free and fair election in Ekiti State and at the general election in 2019.

He raised instances of APC candidate, Dr. Kayode Fayemi in Ekiti State, who he said is not campaigning but planning on how to use money to influence voters and to rig the election in his favour, he called on the INEC to be ready to do justice to the election, and ensure free, fair and credible election.

Impressing on the President to ensure fairness in the Ekiti governorship election, Adewale warned that any attempt to "foist unpopular candidate on the people may lead to stiff resistance which may likely cause civil unrest."

While maintaining that the President gesture on Abiola, which he said past Nigerian leader failed to consider, is commendable, Adewale, however, hinted President Buhari not to take the accolades as a yardstick for votes in the 2019 Presidential election.

He reinforced that Nigerians are in dire need of a truly democratic rule and leaders that will rapidly transform the country's economy for good.