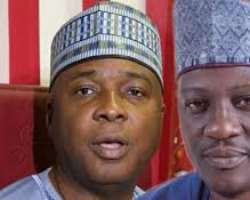 Plagued with scandal upon scandal, it is becoming increasingly obvious to anyone watching the developments that are surfacing, that the days of Bukola Saraki in Kwara State are numbered. His brand of politics is gradually becoming a thing of the past in Nigeria, an those who fail to see it soon enough will live to regret it. All this comes on the heels of televised revelations from the Nigerian Police that indeed the leaders of the gruesome robbery in Offa, Kwara State, were the armed thugs employed and armed by the same Bukola Saraki. In fact, one of them was in possession of a vehicle that had his name on the license plates! The actions of the Kwara State Governor to try and cover this up only further reinforces the case against them.

If the Governor of Kwara State and the Senate President were self-respecting upright people, they would be preparing to resign from their positions. Since they have not, I am saying again today, that I David Kuranga, a citizen of Kwara State, am calling the “Governor” of Kwara State and the Senator from Kwara Central District, to resign from their positions, effective immediately. Not only did they fail to provide adequate security equipment to the City of Offa–[such as armoured vehicles, surveillance drones, and fortified barracks]–they are the very perpetrators who armed and equipped the robbers instead! This is total madness! It does not matter how many paid supporters they want to send out with posters looking like fools, Kwara State today is a leaderless state, with criminal thugs now in control. Not even opposition figures in Kwara State are espousing qualities of leadership. If they were, articles of impeachment would already have been drawn up and tabled in the state legislature. Unfortunately there are no leaders in either chamber, and no leader among the office holders in Kwara State. Even more disturbing, is the deafening silence from those seeking to occupy office in the state. Nobody deserves to hold office in Kwara State if by now they are not coming out publicly condemning both the Governor and the Senate President and calling for both of them to do the right thing and resign immediately.

The sentiment on the ground in Kwara State is brewing as the polity prepares to shake the current establishment to its core. The revelation of these well-armed political thugs of the ruling establishment has clearly shown the masses their true and undeniable identity, that for years they used thugs to rig elections. As the sun sets on Saraki in Kwara State, the new leadership that emerges has to come from outside. Nobody in the current political establishment is worthy of being elevated to anything above street sweepers. At the very minimum, they have sat silent and watched a decay of corruption, debauchery, and bad governance spread across the state resulting in the suffering of the masses. Chronically public salaries are unpaid, pensioners die awaiting payments, Baruten LGA has become part of Benin Republic, all the while with all this going on “Governor” Ahmed ensured that Bukola Saraki received his ex-governors pension package that Saraki himself signed into law! As if this was not enough, Panama Papers and Paradise Papers have shown a web of deception and hidden assets of Saraki all over the world, some of which were illegally never declared, accounted for, or the source of which proven. Further, his district in Kwara State Central sits with poor infrastructure, flooding “roads”, pathetic “schools” that even he would never attend, and a health care facility that Saraki would not send his dog to be treated let alone anyone in his household. All of this after him being in office representing the state for 16 years!

However, nothing compares to the recent revelations of the Nigerian police force. Kwara State is becoming a national embarrassment and a total and utter disgrace to public service and elected officials nationwide. What is even more disconcerting is the deafening silence from members of the ruling party of the President (APC) and from the so-called opposition parties in Nigeria. Both Senator Saraki and “Governor” Ahmed, should not be allowed to finish out their terms in office. Both should be removed from office officially without delay. The fact that there are so few calls for this, is a further indictment of the moral decay in the Nigerian political class, media class, business class, and civil society. What is going on in Kwara State is madness, yet what we are now seeing in Nigerian society in response to what is occurring in Kwara State is even crazier. Nine police officers are DEAD! At least 2 dozen other people were killed on the spot! An those responsible were armed by and worked for a “Governor” of the State and the Third Highest Ranking Politician in the Nation who obstructed justice by trying to cover this up!? There is God! An whether these people realize it, he sees all of this and is not neutral. In an act of providence, it is God that has caused this house of cards to crash. Hopefully these worthless enablers of corruption in both the APC, PDP, other parties, the Media, and Business community, that are tacitly supporting this madness in Kwara State with their spineless cowardice, fall along with them.

Kuranga and Associates Limited is an investment management advisory firm and an asset manager with a principle practice area of Africa. To learn more about Kuranga and Associates LTD contact us at [email protected]. © Copyright 2018 David Kuranga. All rights reserved. This material may not be published, broadcast, rewritten or redistributed.

The author is the Managing Director and Principal of Kuranga and Associates Ltd Nigeria, and the Associates Incubator New York, a full-service investment, political and economic risk consultancy, and asset management firm that specializes in early stage high-growth investments. He is also the author of The Power of Interdependence with Palgrave Macmillan Press.