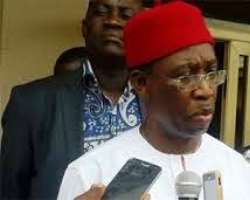 Two months to the 2018 African Senior Athletics Competition to be hosted by the Delta State government at the Stephen Keshi Stadium, Asaba, the state capital, the state governor, Ifeanyi Okowa, has expressed doubts over the readiness of the stadium.

The governor also lambasted the Housing Commissioner, Architect Joseph Ogeah, for romancing with the contractor leading to slow pace of work at the stadium.

Okowa who expressed displeasure while inspecting the project to ascertain the level of work done ahead of the competition, said from a layman’s point of view “I don't think it can be delivered before the time, based on their usual level of working”.

According to the governor, “I am not happy over the level of the work, when you have lost time, you should try to make it up by working day and night with a lot of personnel to meet up the time but they are not doing so”.

He urged the Housing Commissioner to be supervising the stadium project every two days, saying “We are now under pressure to deliver this project for the competition. We don't expect you to be at the site at the end of June”.

Meanwhile, in what look like Nollywood scene, the generating set supplying power to the stadium went off immediately the governor stepped into the entrance of dressing room/clinic/administrative offices which prevented the governor from further inspection due to the dark nature of the place.

The governor was stranded at the entrance about 30 minutes while the workers were running from pillar to post in pretense as they made unhelpful efforts to put the generator on, frustrating and preventing the governor from inspecting the place.

Investigation revealed that there was nothing on ground as the contractor among others does not want the governor to find out the state of the dressing room and administrative offices.

In another development, Okowa, has expressed anger over the slow pace of work at the Asaba stadium project.

Okowa who could not control his anger when he paid an unscheduled visit to the stadium project on Monday to ascertain the level of work done ahead of the competition just as it was learnt that the governor summoned the contractor on Wednesday to appear in government house.

According to governor, “I am not happy over the work; nothing is happening here, it is obvious that you are not ready to deliver this project. Don't push me to take action that you may not like and you are free to go to court to challenge any action I will take”, he threatened.

He noted that his effort is being sabotage by the contractor following the manner the work being is done, adding that he is under pressure to deliver the stadium on or before the end of June.

Investigation revealed that his brother who is the chairman Delta Sport Commission, Mr Tony Okowa and Mr Solomon Ogba are the alleged brains behind the delay of the project.

It was gathered that Okowa, who saw cameras of TV stations beamed on him with other reporters on ground allegedly warned them not to report the situation.