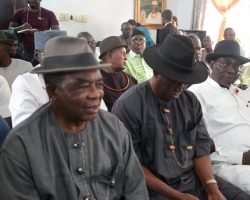 The leaders of oil and gas producing communities in Delta State, have vowed to resist any attempt by the National Assembly to further enslave and impoverished the host communities in the controversial Petroleum Host and Impacted Communities Development Bill.

They insisted that the Petroleum Host Communities Fund should be maintained at ten percent (10%) monthly profit of oil companies as was initially proposed, and totally rejected the paltry 2. 5 % proposal and enormous powers and functions given to oil companies

under the instant bill.
” Any attempt to use the instrument of legislation to alter the present structures would result in instability in operations of Chevron Nigeria Limited and other oil companies. The oil companies have no business in determining the emergence of community representatives who manage the host and impacted communities fund. We state clearly that giving oil companies the right to choose those that would be saddled with the responsibility of administering host communities fund would lead to unnecessary meddlesomeness by the companies (settlors) in the internal affairs of communities with the attendant and unthinkable negative consequences”.

It continued ” Propelled by the desire to meet the peculiar needs of the host communities, the governments of Presidents Umaru Yar'Adua and Goodluck Jonathan proposed THE PETROLEUM INDUSTRY BILL in 2009 and 2012 respectively wherein the Host Communities Trust Fund was created. Section 118 of the proposed PIB 2012 clearly states that ten (10) percent of the Oil companies (Hereinafter ''OCS') net profits should be remitted for the benefit of the host communities”

” The proposed bill is only geared towards making the Oil Companies overlords, emperors, tyrants and colonial masters over and above the indigenous occupants of these communities. In fact, a further perusal of the Bill reveals a collaborative, joint-venture sinister move by our legislators and the Oil Companies to enact the slavery of the host communities that was hitherto stopped by the doggedness and foresightedness of William Wilberforce who was instrumental to the abolishment of slave trade in the 19th /18th century”.

” It is strange, unthinkable and undemocratic for oil companies to be saddled with so much powers and responsibilities with respect to the internal governance of oil producing communities in the instant bill before the National Assembly. There is no basis at all for persons from outside oil producing communities to be involved in the management of the host and impacted communities funds. The oil communities should be allowed to exclusively govern themselves because all the host and impacted communities have capable men of integrity who can manage their own affairs”.

It added ” The present structure which is totally driven by communities with slight oversight by the state governments and regular briefing of the oil companies of the communities activities is sufficient. We hope that the National Assembly will heed to good reason and give our demands the best consideratiproposal deserve and save the Nigerian oil industry another round of troubles”