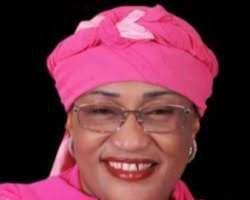 The National Leadership of APC Youths Renaissance has described as false the news report in the social media claiming that the Honourable Minister of Women Affairs and Social Development, Senator Aisha Jummai Alhassan was teargassed and denied access in to the main hall of the party during the inauguration ceremony of states party chairmen on Monday.

In a statement released to newsmen in Abuja by it's National Secretary, Mr. Collins Edwin, the group noted that neither Mama Taraba as the Women Affairs Minister is fondly called nor any Minister in Buhari's government was teargassed at the party secretariat.

Hence, the report is nothing but a figment of the imagination of the tale-bearers.

The Minister is a loyal party member and was not involved in any kind of protest or disorderliness at the party secretariat on Monday and so we wonder how the purveyors of such hallucinating stories came about with their junk report.

We therefore urge journalists and editors of the various news organizations to always cross check their facts before publishing their stories to the reading public so as to avoid overheating the polity as we draw closer to 2019.

This advice has become timely because as we approach the 2019 general elections, the media being the fourth estate of the realm may unknowingly fall in to the hands of some anti-democratic forces who have never hidden their desire to scuttle our fledgling democracy.