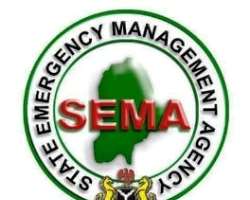 It also cautioned them to respect all the guiding principles that are needed to be observed while conducting distribution of food and non food items such as separate Exit and Entry Points, convenient facilities, screening and issuance of coupons, engaging camp leadership to capture diversity and compliance with the principles of gender, ethnicity, age, religion, and disability while delivering assistance.

The Executive Chairman of SEMA, Borno State, Hajiya Yabawa Kolo who dropped the warning Tuesday at a press conference with journalists held at the Conference hall of SEMA headquarters Maiduguri added that any erring individual or organization that may cause or create any havoc to the IDPs while conducting any distribution will have him or herself to be blamed and the law will take its due course through the 'Access To Justice' Project run by the NBA Maiduguri Branch Chapter in all the camps.

She also advised philanthropic individuals and organizations to seek for security escort from the nearest Divisional Police Station closer to the distribution points. While thanking all the individuals, organizations and agencies that were rendering humanitarian support and services to the IDPs Gods reward abundantly in the spirit of the holy month of the Ramadan.

The Executive Chairman further said that SEMA expects them to operate in compliance with the humanitarian principle of humanity, neutrality, impartiality and independent as a yardstick guiding distribution. While expressing concern to issues or problems of food items and relief materials distributions at IDPs camps with political, religious, regional or ethnic motives by some individuals and organizations except a few who were conducting the distributions based in humanity or humanitarian support.

Hajiya Yabawa however appealed to all intervening agencies and non governmental organizations that lack the capacity to control or manage crowd during heir distributions should always seek the assistance of SEMA trained and experienced volunteers to assist them carry out their distribution exercises at the IDPs camps.

She also said that SEMA has strongly expressed it's dismay over the recent happenings at formal and informal IDPs camps during distributions of Iftar Ramadan Kareem and other food and non food items.

Hajiya Kolo noted that SEMA has been carrying out sensitization and advocacy programmes in all the IDPs camps particularly on gender based violence, health and socio economic development including girl-child and drug abuse, rape and prostitutions, earlier girl child marriage among others in collaboration with the security agencies, Access To Justice and other partners.

The Coordinator, Access To Justice, Barrister Babakura Kaka who is also the outgoing NBA Chairman, Maiduguri Branch said the project was present at every IDPs camp holding legal cases and issues free of charge to the IDPs purposely intervening on legal matters rendering free legal services for the IDPs including Human Rights issues.