#ProscribePoliticalTerrorism: Saraki's Terrorists and the Making of a Boko Haram in Kwara State 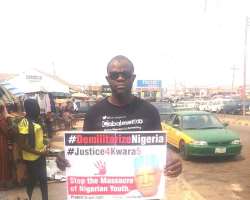 The chilling confessions of the terrorists recently arrested in connection with the deadly Offa bank robbery, are rather unsettling. The arming and unleashing of political thugs by Nigerian politicians, to manipulate and terrorize the electorate and elections is nothing new. However, it is a practice that must end and Nigerians can use the Saraki latest example as a rallying point to bring an end to the culture of political thuggery. We must rise up and march for the Attorney General to #ProscribePoliticalTerrorism in our bloodied land.

People have been killed and maimed as shots have been routinely fired and other forms of terror attacks have marred almost all APC ruling party meetings in recent days. The complicit state security department barely addresses these cases, pretending that the bullets came from unmanned guns and the thugs are not a part of organized crime.

On August 31st, 2017 Mr. Crown Olanrewaju Ahmed, a member of our ENDS organisation was brutally abducted and attacked at gun point by terrorists loyal to senate president Bukola Saraki. Mr. Crown’s cell phone was also stolen in the act of terror; he was stripped and forced by the sponsored terrorists to hold up his “Cabal Must Go” revolution T-shirt and make false confessions. All this happened in the APC secretariat in GRA of Ilorin where he was abducted to as images and witnesses reveal. We since reported the senate president to the United Nations in frustration as the Nigerian police force did nothing. See: http://ends.ng/ends-drags-senate-president-bukolasaraki-fgn-to-un-over-torture-of-citizen-harassment-of-media/

Saraki's history of romancing political terrorists is well known. In 2010 while he was state governor, Saraki granted full state pardon to two political terrorists convicted of murder by the courts. One was Bayo Ajia who was latter assassinated at his car wash and the second person was a certain Olayinka Are. See the story here: https://newsrescue.one/how-bukola-saraki-freed-sentenced-killer-cultists-on-death-row-for-murder/ Saraki freed these two killers to continue tormenting the good people of Kwara. Again when soldiers accompanying senator Shaaba Lafiagi killed five youth in Lafiagi local government, I, Dr. Perry Brimah protested in the state and was invited to meet with the state police commissioner who promised that something was being done. Nothing is yet done. The politicians are able to get away with murder, at most paying blood money to the families and settling the police. There has been no #Justice4Kwara5. Terror has become an official obligation of political office hopefuls and serving politicians. Nigeria remains in the barbaric ages.

Political Thuggery is Organized Crime
Political thuggery in Nigeria is organized crime and Nigeria must address it as such. Boko Haram terror was a result of the conversion of former Borno governor Ali Modu Sheriff's so-called ECOMOG political thug forces into the "Nigerian Taliban' and later Boko Haram. Once there is no more pay from the politicians, or the pay is not enough, the armed, politician-patronized bandits look to other means of making their own coin. They resort to terror as occurred in Borno, in Rivers and as the Offa robbery was.

Nigeria is a mess. The police dedicate 80% of its force to protecting these same wicked and conscienceless political cabal who in turn arm and promote political terrorist thugs to menace the society. That is a double jeopardy. The ones who sponsor the crime usurp the police. And all this happens under the watchful eyes of the wicked and hopeless ruling parties, be it PDP or APC. We the People Must Make Demands of our Government Now:

We must demand that political thuggery terrorism is treated as the organized crime it is and for the government to #ProscribePoliticalTerrorismin Nigeria.

We must demand the redeployment of the 80% police force usurped by the cabal to our communities for the protection of the masses.

We must demand the striping of immunity from public office holders.

We must demand a change in security chiefs of Nigeria and security thinking. Anyone linked to political terror must be treated like an ordinary criminal no matter how high up he or she is.

We must demand transparency in the spending of government security votes; much of which is used to pay these hired political terrorists.

We must demand the politician sponsors of Boko Haram are no longer shielded by the government and are brought to book in full public view.

We must demand that the politicians and wealthy cabal sponsors of the Fulani herder hired terrorists are brought to book and all linked organisations proscribed.

No one should be absolve the law. It is time we stop addressing symptoms but go after the real sponsors that have made Nigeria the worst policed and most terrorized country in the entire world.