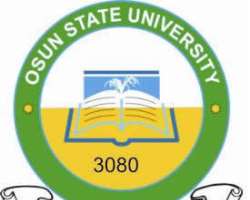 The management of Osun State University, (UNIOSUN) Osogbo, has closed down the institution as it accused the unions in the university of lawlessness and endangering lives of students.

This was contained in a statement signed by the Registrar and Secretary to Council, Mr Gafar Adebayo Shittu on behalf of the management of UNIOSUN.

Shittu said the Governing Council of UNIOSUN approved the closure of the University with immediate effect to avert dangers.

He said the closure of he university became necessary because of what he described as notorious activities of some non-teaching staff members under the guise of unionism.

According to him, "These activities now pose danger to lives and properties within and around the university campuses."

"Management wishes to sincerely apologize to parents, guardians and students for any inconveniences that this closure may cause."

The Registrar said efforts geared towards addressing the prevalent lawlessness have been put in place.

"We urge our law abiding staff and students to remain calm and stay away from the campuses in the mean time", the Registrar said.

Reacting to the development, the Chairman of Non-Academic Staff Union of UNIOSUN, Mr Comrade Isaiah Fayemi expressed shock over the closure of the institution by the management.

Fayemi said "we are surprised that the management decided to close down the university. Our protest has been very peaceful. We started the protest last week Wednesday. We are protesting because the management wants to sack some union leaders for exposing the atrocities of the Vice Chancellor."