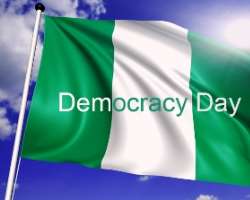 On May 29, 2018, Nigerians will celebrate their 18th anniversary of uninterrupted democratic governance which started in the year 2000. It will also mark the third year of Nigeria’s leadership under the All Progressives Party (APC), after 16 years of the nation’s governance under the Peoples Democratic Party (PDP). The day, therefore, represents the swearing in of the first president-elect, Olusegun Obasanjo, on May 29, 1999. What Nigeria has become of in the last 19 years of democratic rule calls for reflections. Howbeit, with the gradual development witnessed over the years, Nigerians deserve to remember their past and celebrate a determined leadership now in place.

The celebration of May 29 as Democracy Day in Nigeria has been a subject of some controversy. While many Nigerians view the holiday attached to it as an opportunity to celebrate the goodies of democracy and basic human rights, others have kicked against it with the view that there is nothing much to celebrate in Nigeria as regards the new system of governance. Some Nigerians still believe that democracy has done more harm to the nation than before. Some blame Nigerians for their woes, not the system widely believed to have caused the development of many nations and librated many from the shackles of slavery, ignorance and squalor.

Former President Obasanjo initiated it, surely, after wide consultations. Even if it were on personal volition as some critics claimed, Nigerians needed to rejoice for their efforts of diverse magnitude in forcing the military back to the barracks. No one alive then would prefer the continuation of the military rule in Nigeria, witnessing the harshness, the lawlessness and the uncivil regards to unarmed and non-uniformed citizens. But what has the system really brought to Nigeria? Is it just for Nigerians to gather at the Eagle Square in Abuja and state stadiums across the nation to deliver and listen to written speeches laden with chronic sad and past experiences as well as promises of elephantine projects that are never achieved? Or it is to spend the scarce resources on parties for nothing that truly has positive effects on the citizenry. Or what else!

When Obasanjo started this jamboree, many Nigerians were opposed to it. They were right, somehow. In fact, some citizens dragged him to court. I can remember of two human rights lawyers and pro-democracy activists, Messrs Kayode Adaramoye and Niyi Adeleke who went to a federal high court in Lagos, to challenge the constitutional competence of then President Olusegun Obasanjo to unilaterally declare May 29 of every year as a public holiday. Both lawyers had fought for the return of Nigeria to democracy. Besides, they were the heads of a pro-democracy organization known then as Free Democracy. Yet, they found no tangible reason for celebrating May 29 or even declaring it a public holiday.

In the same vein, human rights lawyer and pro-democracy activists, Femi Falana (SAN), carpeted the celebration. According to him, it was meant to spite those who celebrate June 12, 1993 which was the beginning of the anniversary celebration especially by the people of the Southwest to mark the death of Chief MKO Abiola believed to have won the presidential election annulled by then military administrator, General Ibrahim Babangida in 1992.

Falana juxtaposed the celebration with celebrating an attack by armed bandits, an event that recounts grief and lamentation rather than jubilation. There should be no remembrance of such bad experience. It is supposed to be a forgotten event. He said the military rulers behaved like armed robbers; they raped and robbed Nigeria; US$12 billion disappeared, US$5 billion was carted away, among others. He said that public holidays are declared to mark significant events and individuals who positively contributed to the development of their societies like the United States did to honour Martin Luther King for his audacity to challenge racism and vast contribution to the political plurality of the USA. “No serious country in the world ever sets aside a day to mark the exit of military dictators”, he postulated.

Former Secretary General, National Union of Petroleum and Natural Gas Workers (NUPENG), Frank Kokori, was reported to have also described Obasanjo’s May 29 Democracy Day as a spite on late MKO Abiola. He said Obasanjo unilaterally made the day to belittle the late Abiola and others who fought for freedom and democracy for Nigeria. “He (Obasanjo) did it because he always wants to be at the top. His intention was to spite Abiola and those of us who fought for freedom and democracy”, he noted.

Another sound human rights, pro-democracy activist and director of Muslim Rights Concerns (MURIC), Professor Ishaq Akintola, believes that celebrating May 29 is a grievous mistake because it is not worthy of merriment. According to him, June 12 is the way forward on accounts that it represents the beginning of a democratic era in Nigeria. “That is where we are coming from. Let us go back to it in order to jog our people’s memory, ignite their passion and rekindle their patriotism”.

The don lamented that one of the reasons for the failure to resolve Nigeria’s problems used to be the inability of past leaderships to face reality, to admit mistakes and to make amends. He insisted on the commemoration of June 12, as the day all Nigerians decided to sink religious and ethnic differences, for the first time, speaking with one voice on that memorable day from Enugu to Kaura Namoda and from Sokoto to Bayelsa. “The churches rejoiced with the Mosques on June 12, 1993 and Nigeria truly became one”, he observed.

Another strong voice in criticism of the celebration is Dr. David Asonye Ihenacho who wrote on “Biafran Army Officers' Pardon: One Little Step for Nigeria, A Giant One for Obasanjo”. In his submission, he claimed that then President Obasanjo, ”in a search of how to steal the show from Ohaneze Ndi-Igbo,” and in the attempt of putting little smiles on the faces of disappointed Nigerians on his poor performance within one year, muted the idea of observing May 29 as a Democracy Day in Nigeria.

According to him, Ohaneze had earlier sought to wrest the spotlight from MASSOB, which had been preparing to re-inaugurate the Biafran Republic on May 27, 2000. In an apparent opposition as well as obvious deference to MASSOB’s issues, Ohaneze scheduled May 29 to mourn the dead of the Biafran war, the day that fell exactly on the day the Nigerian 4thRepublic was inaugurated in 1999, therefore Obasanjo’s one year of administration. “Rather than sectionalize May 27 or 29, he (Obasanjo) federalized it by declaring May 29 as Nigeria's Democracy Day…This is a father-Christmas-like gift to the Nigerian people from an impoverished nation”, he squeaked.

However, if the initial aim of celebrating Democracy Day was meshed in controversy, the question now is whether there is need to continue it. As least, there are things to remember of the democratic system in Nigeria today, unlike before. With the efforts being put in place by the present federal government not only to diversify the economy but to move the economy from a mono one to agriculture and all its related industries, amongst other transformational indices, I want to emphatically suggest that 29th May of every year be celebrated as Farmers’ Day in Nigeria. This is in addition to the fact that farming is the only economy stability fulcrum because it is permanent and dynamic. Another option may be to call it Unity Day. I wish my compatriots wonder events in all cities of Nigeria.