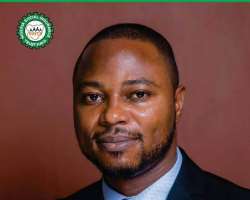 Mr. Jasper Azuatalam a member of Board of Trustee and Executive Director, Nigerian Social Insurance Trust Fund has commended the peace loving members of the All Progressives Congress, Imo State for ensuring that the congresses was peaceful, free, fair and credible based on APC constitution and guideline. Mr. Azuatalam stated this in Abuja on Tuesday during an interview with our correspondent.

The youthful APC Board of Trustee member stated that despite several provocations and attempts to stop the ward, Local government and state congresses in Imo state, APC members were focused and remained resolute to ensure peaceful congresses in the midst of distractions and challenges of the whole processes during the congresses where governor Rochas Okorocha tried his best to ensure that the congresses wouldn’t hold unless he is allowed to provide room to install his son-in-law as governor but the committed members of Apc ensured that the congresses took place according to the Apc guidelines. He stated that he was shocked to see political thugs in their numbers being led by Uju Paschal Chima and Jeff Nwoha trying to assault and molest stakeholders of APC in Owerri he advise them to change and stop deceiving the unemployed youths to take to violence and thuggery as a career.

He added that the aggrieved persons who were not satisfied with the outcome of the congresses had already appealed through the appeal panel and their appeal was discharged and the elections were upheld. The panel in their wisdom declared that elections were actually held.

Mr. Azuatalam while answering questions from our correspondent opined that during the word congress, 7- man panel was sent to Imo state from Abuja by the National Working Committee. The state Executive of the party was to send 3-man delegation to various wards. As they were holding meetings with the Apc state Executive council led by the state party Chairman, Chief Hillary Eke, Governor Rochas okoroacha called the National chairman and rejected the team posted to Imo, he alleged that they will not work on his favour. For peace and justice to prevail, the National Chairman, Chief John Odigie Oyegun ordered the team from Anambra to swap with the team from Imo based on the complaint of Governor Okoroacha. When the team from Anambra arrived to take over from the team from Imo, the initial team from Imo were being held in imo state government house by the governor, demanding that they submit the sensitive materials for the election to him.

They insisted that there was no provision in the party guideline/constitution that copies of the result sheets or any sensitive materials must be given to the governor of any state.

They stressed that it was the responsibility of the state Executive Council of the party to send the 3-man panel to 305 electorate wards in Imo (that is about 915 members) to directly conduct the elections across various wards after which the 7-man team from Abuja will enter the results and take to Abuja and that was what happened.

He further stated that everybody is allowed to pay and obtain the form from the party even Governor Okoroacha himself paid about 18 million naira for those he wants for the electoral contest. And everybody was allowed to participate and the winners finally emerged.

He said that the issue of the rumored court order and cancellation of the elections was a political propaganda designed to stop the congresses. He added that only delegates are expected to participate during the state congress and they have done it at the Federal Government premises in Mbano for the Imo State LGA APC congress.