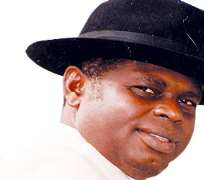 The Bayelsa State chapter of the People’s Democratic Party has said that the opposition All Progressives Congress in the state is a band of cultists, mischief makers and unscrupulous criminal elements masquerading under the platform of the APC who do not mean well for the state.

The PDP said that the Bayelsa APC hounded the pioneer civilian governor of the state, Chief Diepreye Alamieyeseigha to his untimely death and was planting insecurity in his community to destroy his biggest legacy his community, the Niger Delta University.

The Bayelsa State Chairman of the PDP, Chief Moses Cleopas, said in a statement on Wednesday that declaration by the APC that the cult leaders and hoodlums who attacked security operatives deployed to maintain peace and security in the university community of Amassoma were their party officials only vindicated the PDP’s piston that the APC is a nest of criminals.

Cleopas, said that the statement credited to the Bayelsa faction of the APC signed by an aide of Timipre Silva, has shown in clear terms that the APC organized and sponsored the hoodlums and cultists who unleashed unprovoked mayhem on security operatives, the people of Amassoma and the Niger Delta University on Tuesday.

Cleopas lamented the APC faction loyal to Timipre Sylva who has been rejected twice by Bayelsa people hijacked complaints emanating from the ongoing implementation of the public sector reforms to cause mayhem in the community and the university in a failed bid to discredit the PDP government in the state.

The PDP Chairman said that it amounted sheer absurdity for the APC faction to mastermind attacks on the university because of the decision of its governing council and management to retire personnel most of who are between the ages of 65, 70 80 and above.

Cleopas said that the claim by the factional APC that those involved in the protest and reportedly killed in the violence were their members only confirmed the tendencies of the Bayelsa APC faction for desperation, violence, criminality and mischief.

He said that it was indeed asinine, absurd and inane for the factional APC in Bayelsa to claim that all those who they claimed lost their lives or injured were members of the APC.

But the PDP chairman argued that it was more than a mere coincidence that only APC officials were killed in a massively PDP dominated Amassoma.

According to him, the so called APC members are not employees of the Niger Delta University as shown by records of the institution and were not affected by the ongoing implementation of the public sector reforms in the University.

He argued that in the event of an industrial action in any agency, it is expected that the key players in such a protest are those affected by the exercise.

He said that it was rather sickening that a so called political party would sponsor carnage, destroy a police division, part of a university of their own state.

He recalled that the government had to deploy security personnel to Amassoma after three weeks of brazen acts of lawlessness by APC hoodlums to protect law abiding citizens, their properties and the NDU.

Cleopas urged APC to ask Bayelsans to ask the Bayelsa Sylva and his APC faction who the Chairman of the Presidential Advisory Committee on Anti Corruption, Prof. Itse Sagay, Who issued the statement threatening to extradite Alamieyeseigha worked for.