Why did Meghan Markle's mother sit in the 2nd row during the royal wedding? 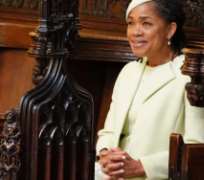 All eyes were on Prince Harry and Meghan Markle on May 19, but many also took notice of the bride's mother, Doria Ragland , quietly supporting her daughter throughout her big day.

The whole world fell in love with Ragland as she shed many tears during the ceremony.

However, many also took notice of the fact that she was seated in the second row at St. George's Chapel, and not the first.

According to royal expert Alastair Bruce, the seating plan was decide by Markle and Prince Harry.

“It's very much a matter for the bride and groom,” he told  Town & Country .

The royal expert added that the couple had enlisted the help of the Lord Chamberlain's office to help with the seating chart.

As for those on social media, some thought Ragland was placed in the second row so that she would be in view of the cameras.

Another Twitter user also noted that Queen Elizabeth II was also sitting in the second row, just on the other side of the chapel.

To be honest, it's good she was in the second row, because otherwise viewers would not have seen the many touching moments of her welling up at the sight of her daughter marrying her prince.