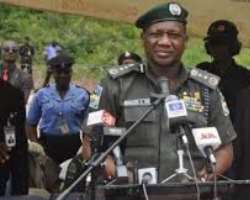 The viral video of Nigeria's discombobulated police inspector general, Ibrahim Idris has been watched by people all over the world in utter shock and consternation.

Nigeria's police chief Ibrahim Idris' misfirings in the clip, of which a good four minutes can be watched here [ ], were beyond pardon. The lives of the entire nation of 190 million citizen's cannot and should not for a minute longer be left in the hands of such a man until his mental and physical health is certified and he tested for the possible use of hard drugs.

There have been several issues raised on the IG's character, prominently by Assembly members . These allegations vary from office sexual misconduct including impregnation of junior staff, to bribe-taking and renting out police officers. Indeed the police chief himself has justified why terror and crime is rampant in the nation by admitting that his office has hired off 80% of the nation's police officers to be bodyguards for the wealthy cabal , thus leaving few and easily overpowered officers to police the masses. These few overtasked officers are easily overpowered and killed as has been happening all over the nation.

Unfortunately, when the initial allegations against the police chief were brought before the people of Nigeria via the national assembly and filed in court, Muhammadu Buharii's government was reported to have advised that the matter be swept under the carpet and settled out of court , not to "embarrass" his administration. See in Vanguard: [ https://www.vanguardngr.com/2017/11/misau-fg-moves-settle-court/ ]

The recent video portraying an unstable police chief, repeating the word "transmission" in incoherent and inebriated sentences is the last straw for a nation in peril, most especially with the ongoing codeine and tramadol epidemic.

Little wonder, Nigeria has been ranked as having the worst police in the entire world.

Video Is 100% Authentic
At this point I must categorically confirm the full authenticity of the video. Eye witnesses have collaborated the event, stating that IGP Idris mangled on for a full 15 minutes before being helped off the stage.

The clip shows a smooth flowing drape behind the police chief that waves synchronously for the full length of the tape, correlating with the sound of the wind. At no point in the tape can a jump be seen in the movement of the stage drapes. Additionally, a frame-by-frame review shows no repeated frames with the many variants, including head positions of the police chief and others in the background and drape movements available for comparison of each clip.

Additionally, if all was well with Idris, why did an aide jump to his rescue and try to help him read? Was that doctored too? Was the aide helping him read superimposed?

The police statement claiming the video is doctored helps slam corruption defenders who peddled that the IG may have intermittent dyslexia. [Cannot be full dyslexia because on other occasions he has been seen to read, albeit with poor grammar.]

We would like to beg the Nigerian government and its fanatics to stop peddling lies. This regime must not be remembered as a regime of lies, especially with the incalcitrant rate of deaths of the poor masses.

IGP Idris need to be tested for hard drugs and retired. Nigeria needs a full security overhaul to properly position the police in the protection of the lives of Nigeria's desperate peoples.

The 80% police currently serving as bodyguards for the wealthy cabal must immediately be redeployed to serve the masses. There must be more funding for policing, better training and equipping of the nation;s forces. We the people are tired of dying.

May the merciful God protect His people and destroy the enemies of the poor masses.