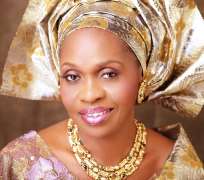 The Federal High Court in Lagos has dismissed an application seeking to unfreeze a Unity Bank account with a balance of N1,902,673,399.93 belonging to Hajiya Bola Shagaya.

Justice Oluremi Oguntoyinbo, in a judgment on Thursday, threw out Shagaya’s application, declaring that it lacked merit.

The Economic and Financial Crimes Commission had, on December 29, 2016 obtained an interim order to freeze the account.

The anti-graft agency had then told the court that the N1.9bn was the balance of a total of N3,305,150,000, which Shagaya received as “founder fees” on behalf of an organisation, Women for Change, being spearheaded by a former First Lady, Mrs. Patience Jonathan.

Justice Muslim Hassan, who granted the order, had said the account would remain frozen pending investigation by the EFCC.

Shagaya, through her lawyer, Mr. Napoleon Emeaso-Nwachukwu, however, approached Justice Oguntoyinbo, seeking too unfreeze the account.

Emeaso-Nwachukwu contended that his client was not given fair hearing before the account was frozen.

He contended that the freezing order violated Shagaya’s right to own movable property under Section 44(1)(k) of the I999 Constitution of Nigeria.

But in her judgment on Thursday, Justice Oguntoyinbo dismissed Shagaya’s application, holding that Justice Hassan did not need to hear from her before freezing the account, since it was based on an ex parte application.

“The interim order was made based on an ex parteapplication filed by the Economic and Financial Crimes Commission.

“An ex parte application has no respondent and the court is not expected to hear from the other party.

“Even when the other party is around, it can only be seen and not heard. Therefore, the failure of Justice Hassan to hear the applicant cannot invalidate the order.

“The granting of the interim order of attachment is not unconstitutional and does not constitute an infringement on the applicant’s rights to own property,” Justice Oguntoyinbo held.

The EFCC had, in opposition to Shagaya’s application, urged Justice Oguntoyinbo not to allow Shagaya to “use this honourable court as a shield against criminal investigation and prosecution.”

The anti-graft agency claimed that the N1.9bn was part of N3.3bn, which Shagaya allegedly realised through “fraudulent activities in the Nigerian National Petroleum Corporation,” where she allegedly “influenced the fraudulent allocation of Dual Purpose Kerosene to Index Petrolube Africa Ltd., with the aid of the former First Lady, Mrs. Dame Patience Jonathan.”

According to the EFCC, the N3.3bn was paid by Index Petrolube Africa Ltd. and its sister company, Autodex Nigeria Limited.

The two companies, it said, belong to one Honourable Ezeani ThankGod, adding that the reason for the N3.3bn payment was to “fraudulently facilitate Dual Purpose Kerosene to ThankGod’s company, Index Petrolube Africa Ltd.”

The anti-graft agency claimed that out of the N3.3bn, Shagaya had “paid a cumulative sum of N1,212,000,000 to the former First Lady, Mrs. Dame Patience Jonathan, through her bank account, ‘Women for Change Initiative,’ domiciled in Diamond Bank, to which the former First Lady is the sole signatory.”

It said that after paying N1.2bn to Patience, Shagaya kept the balance of N1.9bn for herself by “warehousing” same in her personal bank account in Unity Bank.

The EFCC said it was on this basis that it secured an order of Justice Muslim Hassan of the Federal High Court in Lagos on December 29, 2016 to freeze the account.