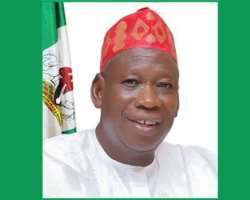 Alhaji Auwal Nai’ya disclosed this in a keynote addressed he delivered at the joint roundtable workshop of state and non-state actors held to assess the level of understanding and implementation of the FOI Act in Kano State.

The HOS disclosed further that the state government has initiated a number of processes to promote transparency, accountability and prudence in government. The Kano State government, according to him has agreed to adopt and implement the Freedom of Information Act through the OGP process which the State has signed unto.

The adoption of the FOI Act in the State is being subjected to wide consultation and will go through the legislative process.

Shedding more light on the speech of the HOS, the Executive Chairman of the Kano State Public Complaints and Anti-Corruption Commission (PCACC) Alhaji Muhuyi Magaji Rimingado, related what the state government is doing to complement the FOI implementation including the establishment of PCACC, its participation in the Open Government Partnership (OGP) Initiative through which it has chosen to adopt the FOI Act and the development of an anti-corruption strategy.

Two issues that run through the roundtable workshops were the observations that there is need for statewide awareness, sensitization and educational activities to carry the people along. They also noted that the existence of the Official Secrets Act and the administration of the Oath of Secrecy on civil servants will impede the implementation of the FOI Act and should be reviewed or repealed as the case may be.

They also made a number of recommendations following the adoption of the communiqué issued at the end of the workshop.

The three-day roundtable which took place from Tuesday, May 15 to Thursday, May 17, 2018, brought together public officials, the media, professional bodies and non-governmental organisations to assess the level of awareness, understanding and implementation of the FOI Act, 2011; ascertain the gaps that exist and work on closing those gaps, as well as to get a sense of the needs that exist in knowledge about the FOI Act in order to adequately prepare and put strategy in place to address the identified needs.

The roundtable recorded various sessions, comprising presentations, situation assessment through administration of questionnaires, feedback through questions and comments and viewing of a video on how members of a rural Indian community called Rajasthan successfully used the country’s FOI law to hold their elected officials to account for funds that they administered and the ripple effect it had in the State which entrenched transparency policy as a result.

The roundtable workshop was held with support from the European Union, through the Rule of Law and Anti-Corruption (RoLAC) Programme, managed by the British Council. The Round table took place at Tahir Guest Palace on Ibrahim Natsugune Road, Nassarawa, Kano.

Kano State is one of the four focal states of the RoLAC programme. The other three states are Adamawa, Lagos and Anambra.

The text of the communiqués is attached to this mail.

Secretary, Board of Governors,