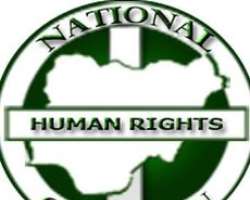 Recent partnership between the Armed Forces of Nigeria and the National Human Rights Commission (NHCR) to improve the mainstreaming of Human Rights and civilian protection into Counter Insurgency Operations in the north east is yielding positive results, as troops gathered together today Thursday at the reception hall of Dujima Hotel in Maiduguri to receive training on the protection of Human Rights.

Flagging off the training session, the Executive Secretary NHRC Mr Tony Ojukwu stated that though the Nigerian military and other law enforcement agencies have performed exceedingly well in containing the insurgency, it is desirable to sustain the gains made, by training military officers and other key security personnel who are directly involved in the Counter Terrorism and Counter Insurgency Operations, on Human Rights protection.

Colonel Onyema Nwachukwu, Deputy Director Public Relations Theatre Command Operation Lafiya Dole in a statement said he recalled that the Federal Government deployed the military to conduct the Operations in an effort to restore normalcy in the region at a time when the activities of the insurgents were devastating the north eastern states in a large scale. Ojukwu enjoined the participants in the training to extend the knowledge acquired to their peers.

In a goodwill message to the participants, the Theatre Commander Operation Lafiya Dole, Major General Rogers Nicholas told the gathering that the current Service Chiefs of the Armed Forces of Nigeria established Human Rights Desks at all Services and Formation Headquarters to meet the dictates of global best practices.

He added that though the operations in the North East theatre is a complex one, troops have remained highly professional in conducting their operations.

General Nicholas expressed optimism that the training will further reposition officers ,soldiers and other security agents in the theatre to competently protect the rights of civilians.

He enjoined the participants to imbibe the training and transfer the knowledge and skills acquired to their contemporaries.

Noting that the military are the first humanitarians in conflict situations and that troops deployed in North Eastern Nigeria have done well in this regard, the Head of the United Nations High Commission on Refugees (UNHCR), Mr Ceaser Tshilom stated that there is still room for improvement, hence the need to train troops on Human Rights and civilian protection.

Participants in the training were drawn from military formations and units, as well as other security agencies in the theatre of operation.