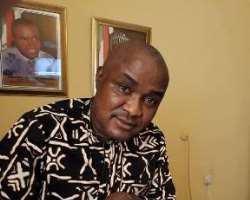 These times in Nigeria are perilous. These are times when the public space is populated by paid agents provocateurs whose stock in trade is to grand stand and ceaselessly issue meaningless media commentaries in support of the tyrannical status quo represented by some segments of the executive arm of government in Nigeria.

Some of these agents of disunity and provocation have in the very recent times become trenchant critics of the senator Bukola Saraki’s led Senate of the Federal Republic of Nigeria and have abused the privileged and rare access they enjoy in the Nigerian media to demonize the senate and the National Assembly.

The inspector general of police has clearly become a thorn in the flesh of the democratic governance of Nigeria to the extent that he has constituted himself into an autonomous government within the Republic.

He (the IGP) has thrice disrespected the senate’s invitation to appear before it and take series of questions that relates to the Rule of law and the rising state of insecurity and break down of law and order.

Some of these adversaries of the senate have been seen arguing that the legislature lacks the power to so invite the holder of the office of the inspector general of police.

This position is at variance with common sense, logical reasoning and the fuller import of the provisions of the constitution.

Section 4 states that “the legislative powers of the federal Republic of Nigeria shall be vested in the National Assembly for the federation which shall consist of the senate and the House of Representatives.”

Section 80 concedes the powers and control over public funds to the legislature.

Section 88 (1) specifically grants the legislature the powers to make laws and the powers of lawful summons.

The Nigerian constitution in section 88 (1) states thus: “subject to the provisions of this constitution, each House of the National Assembly shall have power by resolution published in its journal or in the official Gazette of the Government of the Federation to direct or cause to be directed an investigation into (a) any matter or thing with respect to which it has power to make laws; and (b) the conduct of affairs of any person, authority, ministry or government department charged, or intended to be charged, with the duty of or responsibility for (i) executing or administering laws enacted by the National Assembly, and (ii) disbursing or administering moneys appropriated or to be appropriated by the National Assembly.”

Section 215 (1) of the constitution states thus: “there shall be (a) an Inspector General of Police who, subject to section 216 (2), of the constitution shall be appointed by the president on the advice of the Nigeria police council from among the serving members of the Nigeria Police Force; (b) a commissioner of police for each state of the Federation who shall be appointed by the police service commission.”

The inspector general of police is one of the key officials of the national security forces even as section 218 (4) (a) and (b) and 219 of the constitution states that: “the National Assembly shall have power to make laws for the regulation of (a) the powers exercisable by the president as commander in chief of the armed forces of the federation; and (b) the appointment, promotion and disciplinary control of members of the armed forces of the federation. 219. The National Assembly shall (a) in giving effect to the functions specified section 217 of this constitution; and (b) with respect to the powers exercisable by the president under section 218 of this constitution; by an Act, establish a body which shall comprise such members as the National Assembly may determine, and which shall have power to ensure that the composition of the armed forces of the federation shall reflect the federal character of Nigeria in the manner prescribed in the said section 217 of this constitution.”

From the compound reading of the aforementioned provisions of the nation’s laws, what is clear is that the National Assembly has the legal power to invite any head of the security agencies to inquire into the ways and manners that they carry on their lawful duties for the promotion of good governance and the sustenance of constitutional democracy.

Democracy dies the moment the legislators are cowed into submission or into accepting the whittling down of the constitutional powers of summons which are integral to the sustenance of democratic and constitutional government. How else can the holders of public office be held to account if the central law making bodies can not lawfully interrogate them?

Professor John Keane, in his classic titled: “The life and death of democracy” alluded to the aforementioned.

“History is often said to be a catalogue of human sorrows, and unending story of bootlicking, a slaughterhouse of crimes. It is not always so".

The Professor recounted that "the mould of cruel servitude can be shattered, as happened 2600 years ago, when Greeks living on the south-eastern fringes of Europe laid claim to an invention that now ranks in historical importance with the wheel, the printing press, the steam engine and the cloning of stem cells."

He wrote further: "Born of resistance to tyranny, their claimed invention at first caused no great stir. Few spotted its novelty. Some condemned it for bringing chaos into the world. Nobody predicted its universal appeal. It seemed simply to be part of the great cycle of human affairs – yet one more example of power struggles among foes. The invention was soon to be seen differently. It was to magnetize millions and to arouse passions on world scale, understandably so, since it required human beings to picture themselves afresh, to live as they had never before lived. The invention was a potent form of wishful thinking that is still with us today: the Greeks called it demokratia.”

“In contrast to things whose names immortalize their inventors – newtons, Hoovers, Rubik’s Cubes for example – democracy has no known wordsmith."

According to Professor Keane, the roots of the family of terms that make up the language of democracy, and exactly where and when the word was first used, remain a mystery.

His words: "Through the fog of the past only random clues appear, in the guise of wild-looking, ungroomed figures bearing suggestive names like Demonax of Mantinea, the bearded, robed, sandal-shod lawmaker who was summoned (around 550 BCE) by the women of the Oracle of Delphi to grant the people of Cyrene, a Greek-speaking farming town on the Libyan coast, the right to resist the tyranny of the limping, stuttering King Battus III, and the right to gather in their own assembly, to govern themselves, under their own laws”.

From the above scholarly analysis of the foundations of the concepts of democracy, what is clear is that the Parliament or law making platforms are essentially of prime importance.

So, it is my argument that the Inspector General of police or indeed any other person who operate under the platform of Nigeria’s constitutional democracy are subject to invitations if and when the need arises because the legislature is the law making platform whose essence is to formulate actionable laws that would guarantee security of lives and property of the citizenry.

Section 14 of the constitution says the primary duty of government is the security and welfare of the citizens.

The telos of this piece is to ask the senate president, the speaker of the federal house of representatives, to stand their ground in defence of constitutional democracy and never give up their powers which must be put to good use to ensure checks and balances and to bring about accountability and transparency in civil governance.

Let the hierarchy of the National Assembly borrow from the United States whereby the principle of stand your ground has been elevated to such a scale that even permits self defence making lawful use of guns.

A United States media had reported that the South Florida appeals court had upheld the constitutionality of a controversial change to the state’s "stand your ground” self-defense law — but also might have set the stage for a debate at the Florida Supreme Court about how the change should apply in some cases.

The decision by the 3rd District Court of Appeal in a Miami-Dade County shooting case came a week after another appeals court ruled on similar issues in a Hillsborough County case. The two appellate courts disagreed on a key issue about how judges should carry out the “stand your ground” change in older cases, a type of legal conflict that can spur the Supreme Court to take up issues.

Both rulings dealt with a move by the Legislature in 2017 to shift a key burden of proof in “stand your ground” cases from defendants to prosecutors.

In the decision, a panel of the 3rd District Court of Appeal disagreed with a Miami-Dade County circuit judge, who ruled that the legislative change was unconstitutional because it violated the separation of powers. The circuit-court ruling was rooted in the Supreme Court’s constitutionality authority to set rules of practice and procedure for the court system.

The “stand your ground” law says people are justified in using deadly force and do not have a “duty to retreat” if they believe it is necessary to prevent death or great bodily harm. When the defense is successfully raised in pre-trial hearings, defendants are granted immunity from prosecution.

Before the change was passed last year, the Florida Supreme Court had said defendants had the burden of proof in pre-trial hearings to show they should be shielded from prosecution. With backing from groups such as the National Rifle Association, the 2017 change shifted the burden from defendants to prosecutors to prove whether self-defense claims are justified.

“The amendment (to the “stand your ground” law in 2017) shifts the burden of proof to the prosecution after the defendant has made a prima facie claim of justified use of force, and it requires that the state (prosecutors) meet this burden of proof with clear and convincing evidence,” said the decision, written by appeal-court Judge Ivan Fernandez and joined by judges Thomas Logue and Edwin Scales. “This is consistent with the well-established legislative practice of passing statutes allocating the burden of proof in judicial proceedings.”

Let the National Assembly members maintain a vigorous STAND YOUR GROUND approach and defend the Constitution. They don't have to resort to the use of violence or gun but should rely on the moral and legal authorities concedded to them as the law making body of the Country and not to allow the Executive arm of government to clip their wings and disallow their exercise of their lawful authority and duties for public good.

*Emmanuel Onwubiko is the Head of the Human Rights Writers Association of Nigeria (HURIWA) and [email protected] www.emmanuelonwubiko.com; www.huriwanigeria.com; www.huriwa.blogspot.com.