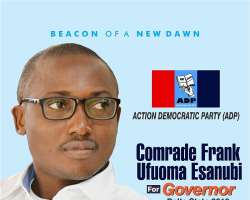 As preparations ahead of the 2019 general elections gathers momentum, the governorship aspirant of the Action Democratic Party (ADP), Comrade Frank Ufuoma Esanubi, has sworn to kick out the incumbent governor, Ifeanyi Okowa and the ruling Peoples’ Democratic Party (PDP), out of the state for alleged nonperformance.

The gubernatorial aspirant also promised that when elected he would create job opportunities for Deltans, promising that moribund industries in the state would be revamped to employ youths.

Esanubi posited that the poverty experienced across the state is a product of failed successive and present governments of the PDP occasioned by misused resources, “if our resources are well utilized, we will not be in the situation where we are”, he likened the situation to a father who goes to the bar to drink and tells his children that things are tough that they should manage, “it is not lack of resources that is causing suffering in that house, it is misused resources available to that house and that is the problem we suffer in Delta State today”.

He assured that when he comes on board, his administration would correct the anomalies created by PDP, “PDP has been in power for the past 18 t0 20 years, the question to ask ourselves is that how has our lives improved between 1999 to 2018?

He tongue lashed the state government for presiding over the collapse of industries in the state, “Enternit that was employing thousands of people, a state government sits down and see that the company is collapsing and presides over the fall of that company. No sane government does that”

He said government that have ruled the state in time past including the incumbent, only takes care of their political appointees to the detriment of Deltans, saying that his mission is to ensure that resources of the state are well used for the benefits of the citizens of the state

According to him, one of the major cardinal programmes we are going to have as a state is in the area of empowering our graduates. As soon as they finish their academic programme and they go for youth service; for evety graduate that finishes youth service that is of Delta State origin, we are going to provide a facility of up to N1 million for the person to start business.

He said one of the conditions that makes a state of the state origin to qualify for the facility, such a student must have attended public tertiary institutions, “the people who will be our focal point are those whose parents are farmers in the village, teachers and civil servants who do not have enough resources to send their children to private schools”, revealing that those in the informal sector would be trained and facilities would be given to them.

He challenged all party faithful to spread the good news to the people just as he discouraged the masses from believing that votes don’t count.

Earlier, in his opening remarks, the state chairman of the party, Barr David Ekwetafia, who presented the governorship aspirant to the people said the essence of the meeting was to have an interactive session with the guber hopeful and other aspirants from the party.