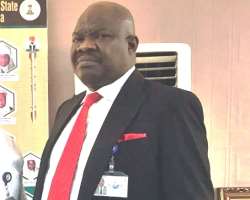 Contained in an open letter gone viral on social media by one of his constituent, Mr Okwa Darlington Precious, Owhefere was advised to kill the ambition due to the fact that he has failed on his mandate.

Okwa also stated that the lawmaker's bid to return was for his personal interest and not for the betterment of his people.

Contents of the letter read as follows;

I listened with glitz to your declaration to run for the seat of the Delta State House of Assembly to represent Isoko North State Constituency in 2019. I am most happy for you because it is the desire of everyone to advance his course and aspirations and that you have tried to do.

I am also happy because you diligently used words so soothing and romancing to silence the people you reeled your intentions to that none was able to stand up to contest your stand. It shows you're a master charmer in the act. Thumbs up Sir!

I have the following observations carefully picked from the record of you by Mr. Henry Obaro Akponovo.

Sir, in your speech you said, “Sending someone new to the house will not match you because of your experience so far”. Sir, prior to your being voted for as member representing the constituency, do you have any experience as regards legislation?

Secondly, you mentioned and I quote, “I am 'almost' an authority in the house”. If you are an authority, how far and how well have you displayed this authority to manifest in the development of the Constituency you represent? Or should we say that Hon. Mariere and Hon. Izeze are more authority than you in the house since they have more tangible projects and human development strides than you in the past three years? Besides, why 'almost' and not 'an' authority as a Majority Leader in the house? Is it not also lackluster that you are talking about the numbers of cars in your opponents' entourage compared to the numbers you intend to pool as a three term legislator?

Sir, why do I have this feeling from your speech that you have decided to remain in government just to secure your daily bread because there is nothing else for you to do as a person rather than being in a government to make Isoko better?

Sir, you did undermine the power of the media. Have you ever pondered what ruined GEJ and easily rode PMB to Aso Rock?

Sir, you made a very wise statement when you said, "you don't change a winning team." What about a player in the team who gets injured or his performance is below expectation? In another news, you said the status quo remains. If the status quo remains, How come you didn't tell us what the issues were and what you will do differently to enable your people know the problems you have faced? Or is it your wish to go back just to maintain the DEITY STATUS?

An advice: Be mindful of those who sit in the palace with you. Their facial expressions are not the products of their thought processes.