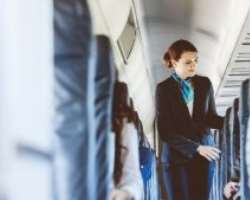 An air hostess from a British airline has lifted the lid on the mile-high bonks, romps with pilots and celebrity affairs that go on among the glamorous crew.

The stewardess, who wishes to remain anonymous, claims life on board is every bit as outrageous as the famous names she's met.

She first joined the airline “to travel the world, meet new people and get paid for living the lifestyle.”

Now, 15 years later, she claims she's seen and heard it all — and revealed that two girls last year were making money by having sex with first class and business class passengers.

She said one stewardess got caught trying to drum up business as a prostitute on a flight. She said one stewardess got caught trying to drum up business as a prostitute on a flight. (iStock)

“She only got [fired] because she changed hotel rooms but she hadn't informed her [customers] that she had — and they were turning up looking for her. Another stewardess did the LA trip and she had a nice little business down there of people coming to her hotel room and having sex with her.”

“It was perfect as she was meeting really high-end people, business class and first class, meeting the real, real rich guys where money is nothing and they are willing to pay for it — for a young bit of [a babe] with a small bum and a tight skirt.”

When meals have been dished out and there is a quiet point in the flight, the cabin crew worker alleges, she regularly hears of staff performing sex acts on each other in the crew rest area. It wasn’t just attendants soliciting passengers. The Sun’s source claims crew members would engage in dirty deeds with each other in their designated rest area. (iStock)

And during one risky romp, a pilot was said to have had sex with an air hostess mid-flight in the back of the cockpit.

The cabin crew worker revealed: “On a 747 [jet,] the pilots have bunkbeds at the back of the cockpit and the captain was seeing a stewardess and there were two pilots taking over for the captain to have a break.”

“They let him and the girl go into the bedroom mid-flight, it was all safe, but I believe the bedroom was rocking and it wasn't turbulence!”

Meanwhile, one shameless, cheating pilot, whose wife was on board the flight at the time, hooked up with his air-hostess girlfriend mid-journey without them getting caught in the act.

Not all are so discreet, the air hostess claimed.
She asserted: “It's common for pilots to go out with stewardesses, especially the younger stewardess that join fleets.”

“The girls sometimes believe stupidly and naively that they are something special. The majority of the pilots have partners and families back home.”

“One story I heard was a pilot who had a wife at home who got a stewardess pregnant — and she now lives with them in their home. Whatever floats their boat.”

While mile-high action certainly takes place in the skies, a lot of the raunchy fun happens when the crew land in a foreign country and head back to hotels.

She claimed: “The younger fleet are aged under 21 so can't go out and drink, so many of them have room parties.”

“This is where many of the pilots will get their claws into them, basically. There's been a couple of threesomes.”

Some of the wilder routes are long-haul destinations like Hong Kong or Singapore. While mile-high action certainly takes place in the skies, a lot of the raunchy fun happens when the crew land in a foreign country and head back to hotels. (iStock)

As soon as they land at these far-flung destinations, the crew can get up to three nights to party and explore the country before the flight home.

According to the worker, a lot can happen when “it's a new destination, new people, exciting times and you have the leery flight deck.”

One of the hardest parts of the job, she claims, is dealing with angry passengers who are rude and tired during the flight.

She confessed: “I've had passengers bang on their meal trays because they couldn't have the meal choices they wanted.”

“It's never first class, it's always business class where the people haven't quite made it, but they think they've made it.”

“We had one guy who was really horrible to my friend. When he was asleep, we got his jacket out and we unpicked the seams at the end of his jacket on his sleeves. We mashed up some crab and prawns and then put them in the sleeves of the jacket. You couldn't really feel them.” The flight attendant revealed she had also gotten even with a rude passenger by sewing mashed prawns into the sleeves of his jacket. (iStock)

In another instance, she got back at a group of rowdy Italians who were making pervy comments about her.

She relayed: “Their ringleader was saying really dirty things in Italian and making his friends laugh.”

“When he was asleep, I hid one of his shoes and made him get off the plane with one shoe on. Seeing him in the baggage hold with one shoe was brilliant.”

Sometimes the crew would joke among themselves too, with pilots being tasked to get certain words or phrases into their announcements over the PA system.

She said: “We used to say to the captain, 'In the speech you have to get in words like clitoris.' So they'd be flying back and say, 'So now we are just flying past the island of Clitoris.'”

Another time they tasked the pilot with getting George Michael songs in a speech.

She said: “He said things like, 'Ladies and gentlemen, tonight baby I'm your man and I'll be flying you in a careless whisper.'”

After over 10 years on the job, she said, she is more than capable of dealing with all types of customers and is able to keep her cool when famous passengers come on board. While mile-high action certainly takes place in the skies, a lot of the raunchy fun happens when the crew land in a foreign country and head back to hotels. (iStock)

She said: “We always meet celebs and A-listers, my friend got asked out by a married [soccer player] whose wife had just given birth to twins back from the World Cup.

“I serve someone in first class the same as in economy. People — if they are really famous — they like you to be really normal or they freeze up.

“I know a lot of people who have dated celebrities, though.”

The air hostess, who has had a long-term partner back home so doesn't partake in the wild sex antics, said airlines have gotten stricter in recent times, so the job isn't as fun as it once was.

But she has no regrets about her 15 years in the skies and confessed: “It is just something I've always wanted to do.”

This story originally appeared on The Sun.