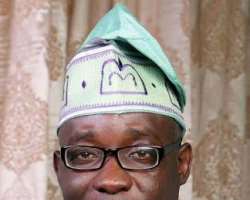 Minister of Mines and Steel Development and frontline Governorship Aspirant of the All Progressives Congress (APC), Dr Kayode Fayemi, has congratulated Ekiti State Deputy Governor, Prof Olusola Eleka, for his emergence as the Peoples Democratic Party (PDP)’s flag bearer for the July 14, governorship election in the state.

Dr Fayemi, a former governor of the state, said the emergence of Prof Eleka in an orderly and peaceful primary, is a welcome development.

He however said the APC would give the PDP flag bearer a good fight for the Oke Ayoba Government House come July 14th, adding, however, that the APC still remains the preferred choice for the generality of Ekiti people.

The Minister, according to a statement by his Media Office, said he is confident that whoever emerges as APC flag bearer in the party’s rescheduled primary on Friday, would be more acceptable to the Ekiti electorate.

Special Adviser (Media) to the Minister