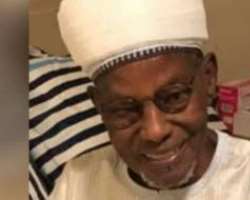 The Amalgamed Traders Association of Nigeria (AMATA) Kano State chapter, has described the death of the renowned businessman and Islamic scholar, Sheik Isiyaka Rabi'u as a great loss to traders not only in Kano but the entire African continent.

Rabi'u, died late evening Tuesday at the age of 90 in a London hospital after a protracted illness.

The Chairman of the association, Alhaji Uba Zubairu made the remark in an interview with the News Agency of Nigeria (NAN) in Kano on Wednesday.

“The entire traders of Africa have lost a strong pillar who will be difficult to replace now and in the near future.

“The people of Kano in particular have lost a patriotic and committed father who had contributed a lot to economic growth and development of the state and its people, “he said.

Zubairu recalled that late Rabi'u during his early days of business hardly sold his imported goods in Lagos, but always brought the goods to Kano to encourage local traders.

“He will not sell the goods in Lagos after being imported. He preferred to sell them after reaching Kano. Traders will come to Kano to buy the goods from Lagos.

“He did this out of patriotism and commitment toward encouragung and promoting business in Kano. It is very hard to get somebody like him now, “he added.

According to him, the late businessman had done a lot to Kano traders as whatever complaint they had was quickly presented to the deceased for immediate resolution.

“We lost a father who was always ready and willing to solve our problems be it with the state or Federal Government or even personal problems.”

He charged other wealthy individuals in the state and the country at large to emulate late Rabi'u 's good qualities for the promotion of business activities in the country.

He prayed to Almighty Allah to grant the deceased eternal rest and the family the fortitude to bear the irreparable loss.

“On behalf of entire traders in Kano I want to condole with the family of late Isiyaku Rabi'u, may Allah grant him Aljannah firdaus,“he said. (NAN)