Granted! The Smartest Igbo Man East of the Niger River 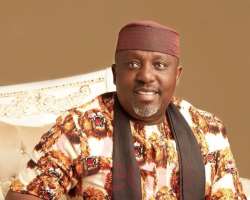 Historians always herald Chief Sam Mbakwe who was governor of Imo State from 1979 to 1983 as the best governor of Imo State and/or the South East region. He was the administrator of the state before the violent coup orchestrated by none other than the current inept Nigerian President General Buhari. I maybe digressing but it is sure amazing how we have continuously failed to learn from history as Nigerians but claim to be the giants of the African continent. Interestingly the smartest Igbo Man East of the Niger River seems to be a radical consumer and implementer of recent Igbo history. Governor Rochas Okorocha aka Owelle is the smartest living or dead Ibo.

Consequently, the great Owelle was able to rescue Imo State from the corrupt and tyrannical former Governor Mr. Ikedi Ohakim. Mr. Okorocha made headway after observing and studying the excesses of Mr. Ohakim who was a known 419 fraudster that managed to take over the geographical middle homeland of the Igbos. He Ohakim governed the state without any guiding political ideology. Mr. Ohakim didn’t receive much opposition from the traditional rulers of Imo State despite his corruption and mediocrity. Rather Ezes, Obis, and Igwes competed for his attention by sending their children and protégés to the Owerri government house for their slice of the state cake.

Moreover, Mr. Ohakim was generous enough to invest the state loot in the hands of the representatives of our so-called kings. During his tenure Owerri the Imo State capital became the playground of the Igbo “princesses and princes.” This was so the case that one resulting effect became the establishment of state of the art hotels and motels at Owerri. Whereas Ohakim commissioned fake projects his benefactors constructed some amenities to aid their quest to defraud the state. Around this time similar activities were going on in neighboring Abia state under the Governorship of Mr. Orji Kalu. As an economic hub Aba city in Abia,aka Enyimba city remains an eyesore till date.

In that era Mr. Ohakim was infamous for slapping around a few catholic priests as he marshaled his theft of the petroleum derived national cake that folks at Abuja insist on handing down without any checks and balances. As all these events played out Mr. Rochas held his notebook out studying and taking notes. Mr. Owelle realized that if the Ibos were so stupid to be played by Mr. Ohakim a lightweight, he could walk all over them with his genius. Mr. Owelle realized that the traditional rulers, their children, and representatives could be bought even in his sleep. Mr. Owelle realized that the catholic priests in Igboland were unlike those in Latin America that fight for people and change.

Accordingly, guised as a philanthropist the Greatest and Smartest Crook East of the Niger River Mr. Rochas Anayo Okoroach aka Owelle emerged to takeover Imo State. As a political opportunist and/or prostitute he roved from one party to the other before convincing Ibos that as a member of the All Progressive Grand Alliance (APGA) he was going to be a breath of fresh air. The APGA is known as the Igbo party thus the Owelle was able to use it after failing with the People Democratic Party (PDP) and All Nigeria Peoples Party. The public administration chameleon is now in another party, having taking over Imo State, which he categories as a home of dimwits.

As a member of the ruling party of Nigeria the All Progressives Congress (APC) the so-called party of change, Mr. Rochas remains a “change agent.”The political maverick has indeed taken Imo State Pan-African and global by sidelining the greedy traditional rulers and their counterparts in the churches. If the real reggae no dey Naija the real statues dey for Owerri. Notable African criminals like President Joseph Zuma of South African and President Ellen Johnson Sirleaf of Liberia now have their hall of shame in Owerri. Mr. Zuma fleeced his country and stood by while Africans were slaughtered in Johannesburg notwithstanding the support and refuge we gave them in the Apartheid days.

Similarly, President Johnson Sirleaf allowed her children to loot Liberia whereas opening up West Africa to the conquering United States Africa Command (Africom). The same folks that are using fringe elements in the north to recolonize West Africa and Nigeria. But the smartest man east of the Niger River Mr. Owelle remains undaunted as he stays studying and acting. He has essentially colonized Imo State with his family and disciples. The guy is so clever that he has anointed his son in-law as the next governor of Imo State. Most Igbos think this can’t happen but recent history proves otherwise. Mr. Uche Nwosu aka Ugwumba, alias young crook in training (YCIT), might very well be governor in 2019.