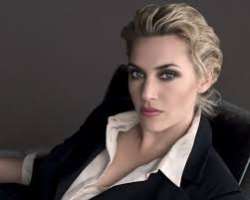 Plunging necklines, cutouts, and gowns slashed to the thigh may be par for the  red carpet , but they're not  Kate Winslet 's cup of tea.

Though the Oscar-winning actress has worn daring dresses in the past, she says she prefers to dress in a more conservative, “age-appropriate” manner now that she's 42.

“I'm suddenly entering that zone, even though my daughter will say, 'Well, Mom, it doesn't bloody matter,’” the British star said of dressing for her age in an interview with  Pret-a-Reporter.  “But actually, at events, I think it does, though in real life it doesn't matter at all.”

But it's Winslet's comments about how other women dress that are bound to stir up some controversy.

“There's something sort of uncomfortable to me about seeing women who are clearly presenting themselves in a way that's designed to make people stare, but not for the right reasons,” Winslet said. “When I walk into a room, I hope to have interesting conversations with people; I'm not interested in whether people look at me or not. In fact, quite the opposite.”

The Titanic star shared how her late mother influenced her style decisions.

“If I have to come to an event, it's always nice to feel a bit pulled together, but nothing that draws too much attention,” she explained. “My mother always said, 'I don't like showoffs, please don't wear any showoff clothes.'

“Even when I became the me post-Titanic, she would still say, 'Please, darling, don't wear anything that draws too much attention.'”

While it's natural for a person's style to evolve over time, there's some concern that Winslet's remarks are shaming women who prefer more revealing or body-conscious looks.