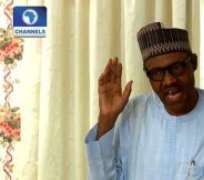 President Muhammadu Buhari has made a stopover in London, as he returned from his trip to the United States where he held talks with President Donald Trump.

There had been no prior official disclosure he would make the London visit.

It would be recalled that the President in 2017 spent several months in the United Kingdom attending to an undisclosed ailment. Upon recovery and arrival in Nigeria, he admitted he had never been so sick all his life.

The Presidency, however, dismissed insinuations the visit had any significance beyond the ordinary.

Senior Special Assistant to the President on Media and Publicity Garba Shehu told journalists, yesterday, that Buhari's technical crew decided to break the long trip from the U.S. to refuel and carry out routine checks.

According to ‎Shehu, “The big jet is under repairs. It has been taken for major repairs, so the President is using a small plane, and there is a limit to the distance the small plane can cover.

There is nothing unusual about it. In any case, they are already on their way back home.

“The plane can do Abuja-Washington. That's about 12 hours. And the maximum the plane can fly is 12 hours, 40 minutes. But you don't need to push it to the edge.”

But the Peoples Democratic Party (PDP), displeased with the unscheduled stop, noted: “The Presidency must understand that President Buhari is not a private citizen. And as long as his upkeep and itinerary are sourced from our hard-earned resources, there must be full disclosure.

Citizens deserve to know the purpose of the visit and the cost to our nation.”

The opposition party, in a statement by its National Publicity Secretary, Kola Ologbondiyan, charged the Presidency to end its cycle of secrecy and come clean on the technical stopover.

“President Buhari had on Tuesday left the United States, where he had an embarrassing and fruitless outing. And instead of returning to the country, detoured to the U.K. for another private visit without regard to full disclosure requirements of our constitution and laws,” the party said.

Criticising Buhari's “foreign trips, which come at great costs and have not brought any gains to our country,” the PDP regretted: “The President has continued to de-market our nation in the international arena. The just-concluded Commonwealth Heads of Government Meeting (CHOGM) in London, where he cast aspersion on our enterprising youths and failed to return with any dividend, readily comes to mind.”

It concluded: “President Buhari's admission at the Voice of America (VOA) that he was unable to reach any agreement with President Donald Trump on any matter of interest to Nigeria, during his U.S. visit and that he has no future development agenda to validate his 2019 re-election bid, confirms our position that the Buhari administration has nothing to offer Nigerians.”

The Presidency, meanwhile, has knocked the Nigerian media over alleged misrepresentation of issues during the meeting between the two leaders.

Trump, on Monday, read what could be described as a riot act to the Nigerian government, saying the continued killing of Christians in the country is unacceptable to the American government. He also condemned the spate of other killings by terrorists in Nigeria, describing it as a “terrible problem”.

But Shehu, yesterday, accused the press of leaving out Muslims in its reportage of the one-on-one encounter between the two leaders.

He said: “It is important to explain the context of the remarks by President Trump where he was quoted as saying the U.S. is concerned about the murder or killing, as he put it, of Christians.

“At the press conference, President Trump, towards the end of his remarks, at the briefing, mentioned the protection of 'innocent civilians of all faiths, including Muslims and Christians', which reporters left out.

“In his remarks, the U.S. President neither chided nor talked down on President Buhari. Saying, 'We will do something about that', is a clear expression of willingness to support Nigeria to bring to an end the unwanted killings.

This is contrary to the press reporting which jumped on the issue, conveying a wrong impression that President Trump was only concerned about the lives of Christians. He mentioned Muslim lives as well.”

The spokesman equally described as wrong, the hasty condemnation of the U.S. President by some Muslim groups in the country without the benefit of a full view and understanding of what was said and the context in which it was said.

“It is also important that records be set straight to counter the mischief of opponents, some of whom have started rendering false narratives of a meeting to which they were neither invited nor in any way aware of its details,” he added.

Pope Francis had earlier on Sunday decried an attack on a church in Nigeria.

He was reacting to the killing by Fulani herdsmen of two Catholic priests and 17 other worshippers in Benue State. ‎The Pontiff spoke of the incident during his remarks at St. Peter's Square, Vatican City.

The Christian Association of Nigerian (CAN) had also called for the immediate resignation of President Buhari over his inability to tackle killer herdsmen and other security challenges in the country.

It appealed to the international community to intervene and save the country from relapsing into a religious crisis, describing the Benue attack as a jihad that must be stopped.