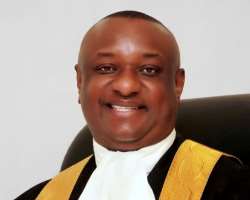 It must be stated from the outset that the "Doctrine of Necessity" is not expressly contained in the 1999 constitution of the Federal Republic of Nigeria, as amended. It derives its origin from the writings of medieval jurists, such as Henry De Bracton and to some extent, Ivor Jennings.

The doctrine is rarely used because of the despotic nature of some leaders who may want to hide behind it to violate their country's constitution such as the one we have at hand in Nigeria; wherein President Muhammadu Buhari spent a whopping sum of $496 Million of Nigerians funds not appropriated for without recourse to the National Assembly.

Simply defined; "Doctrine of Necessity is the basis on which extra legal actions by state actors, which are designed to restore order, are found to be constitutional." This universal definition of the doctrine is hinged on Bracton's maxim which says "that which is not otherwise lawful is made lawful by necessity."

The Bracton maxim was substantially used in the 1954 judgment in which the Pakistani Chief Justice, Mohammed Minur validated the extra constitutional use of emergency powers by Governor-General of Pakistan, Ghulam Muhammad who on October 24, 1953 dissolved the Constituent Assembly and appointed new Council Ministers on the grounds that existing one no longer represent the people of Pakistan.

The nucleus of the legal battle was whether or not the Governor-General had the powers to dissolve the Assembly, after his objection to the country's constituton which the ousted Assembly was about to adopt.

The lesson here is that the case bothers on illegality and deliberate attempt to adopt a constitution that does not represent the interest of the Pakistani People. This has no bearing with spending of funds not approved in a budget without recourse to the National Assembly.

Another classical case in which the doctrine of necessity was invoked happened in Grenada in 1985, wherein the High Court of Grenada validated the legal existence of a Court then trying for murder the persons who had conducted a Coup against former leader, Maurice Bishop.

It was held that though the Court trying the murder case no longer had jurisdiction by virtue of new laws in place but that it had the powers to try the accused persons at the time and therefore necessity demands that it dispense justice so as to sustain the sanctity of the judiciary. A rare case indeed and cannot be compared to Buhari's negligence and/or out right disregard for separation of powers.

Back home in Nigeria, the doctrine of necessity was applied for the very first time on 9th February, 2010 wherein the joint session of the National Assembly passed a resolution making Vice President Goodluck Jonathan, the Acting President and Commander-in-Chief of the Armed Forces of the Federal Republic of Nigeria.

The decision of the National Assembly was applauded by Nigerians because of the apple evidence that Section145 of the 1999 Constitution of the Federal Republic of Nigeria, as amended, was being or about to be violated.

In the Nigeria example where the doctrine of necessity was invoked, the then Civilian President, Alhaji Musa Yar'Adua, who for 78 days had been in Saudi Arabia for medical treatment; refused to formally empower the Vice President to exercise powers as Acting President as provided for in Section 145 of the 1999 constitution.

From the examples cited above, it can be safely asserted that the doctrine of necessity is not and can never be a cheap tool which state actors can arbitrarily and/or arrogantly invoke to oil their political egos and/or display their large appetite for totalitarianism.

THE BUHARI DOCTRINE OF NECESSITY: Mr President may invoke the doctrine on the grounds that all efforts made to ensure that the National Assembly approves the $496 million so as to meet the deadline imposed by American government, failed to yielded deserved result. But this was never the case. The National Assembly was deliberately ignored only to ask the same Assembly to insert money already spent into a bill.

As rightly opined by the Senate President, Bukola Saraki during plenary, there was sufficient time for President Buhari through his Senior Special Assistant on National Assembly Matters to deliver the letter requesting for the urgent approval of the money in question before it was illegally spent.

From September to February is exactly six (6) months, a period more than enough for the National Assembly to deal with such emergency situation considering the fact that insecurity has become the major problem bedevilling the nation. But alas, Buhari deliberately refused to involve the Federal law makers.

For the sacred fact that the executive arm of government deliberately refused to carry the National Assembly along as required by the relevant sections of 1999 constitution as amended; which deals with budgets, appropriation, expenditures, procedures, approvals, impeachment and so on and so forth; the National Assembly is left with no better option than to commence impeachment procedures against President Buhari for violating the constitution.

Nigeria is perceived as a big brother to other African countries and as a key player in the stabilization of constitutional democracies in Africa; failure by the National Assembly to commence the impeachment procedures for the removal of President Buhari is not only a disservice to this nation but will serve as a bad precedent for other democracies in African continent.

FESTUS KEYAMO'S POSITION: The learned silk is one of the best brains not only at the Bar but in dealing with national issues and more importantly his roles in nation building.

He had solid legal mentorship from one of the best legal luminaries, Chief Gani Fawehimin of blessed memory. Not only did the highly respected silk, Festus Keyamo earned accolades from Nigerians in time past due to his proactive roles in human rights activism, he fought for the enthronement of democracy in Nigeria.

What is now strange is the partisan politics that is about to strip the SAN of his hard earned integrity. Keyamo must be told that the Buhari administration has failed Nigerians woefully.

For Keyamo to face television cameras in bright jackets to cajole Nigerians, trying to do the job Alhaji Lai Mohammed is avoiding, is to say the least very sad and unfortunate for an inner bar member of his status.

The doctrine of necessity that was allegedly invoked by President Buhari as presented by Keyamo constitutes a disservice on his part to the people of Nigeria; on the one hand and a deliberate attempt for a Senior Advocate of Nigeria to aid the Executive arm of government in violating the 1999 constitution of the Federal Republic of Nigeria, on the other hand.

Similar deadline issues happened in America and President Barack Obama prevailed on congress through extensive lobby and they met the deadline few minutes to midnight and or expiration. President Buhari choose to violate the 1999 constitution by bypassing the National Assembly without making the slightest move or effort.

I want Keyamo to research into similar developments in the United States and elsewhere in the world and am pretty sure that his findings shall certainly annul his position in the instant case.

The then Senate President David Mark did not unilaterally invoke the doctrine of necessity to prevent the violation of the 1999 constitution; he carried the lower chambers and Nigerians along. He consulted widely, and editorial comments in our national dailies applauded the timely invocation of the doctrine by the joint Assembly.

Keyamo should tell Nigerians one single effort made by President Buhari to carry the National Assembly along in this matter. If Keyamo were to be a serving Senator in the 8th Assembly, would his thinking and position be different?

National Assembly over to you.

Dr Fred Latimore Oghenesivbe is a Lawyer, Public and International Affairs Commentator. He is also the Executive Assistant to the Governor of Delta State on Communications and full member of the Nigerian Institute of Interntional Affairs (NIIA), Member, International Communication Association (ICA) and Fellow, Civilian Institute of Democratic Administration (FCIDA), et al.