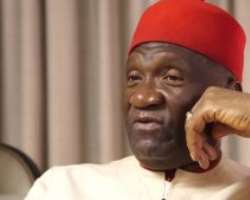 The Peoples Democratic Party (PDP) has called for investigation  into the  the explosion at the country home of the President of Ohaneze Ndigbo, Nnia John Nwodo,  at Ukehe in Enugu State.

The party,  in a statement issued by its  National Publicity Secretary,  Kola Ologbondiyan on Sunday in Abuja, condemned  the explosion.

He described the action of the arsonists as callous, horrendous and wicked.

“Party invites security agencies to unravel the identities of the masked characters behind the dastardly act.

“All our security agencies must swing into action and arrest the culprits to serve as deterrent to others.

The police in Enugu State have confirmed minor explosion at Ukehe  country home of Nwodo in the early hours of  Sunday.

A statement issued in Enugu on Sunday by the police spokesperson, DSP Ebere Amaraizu, said the Commissioner of Police in the state had already visited Ukehe in Igboetiti Local Government area of Enugu State.

Amaraizu said that the command had vowed to unmask those behind the dastardly act.(NAN)