Fresh attacks by herdsmen in Benue 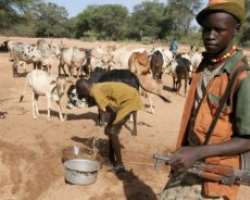 THE Police in Benue have confirmed gunmen attacks on a village on the outskirts of Daudu, but declined to give details of the attack and the number of casualties.

Confirming the attack to the News Agency of Nigeria (NAN) on Wednesday in Makurdi, the state Commissioner of Police, Mr Fatai Owoseni, said people were killed by the gunmen who attacked the village.

He, however, said the information on the incidence was still sketchy.

The commissioner noted that some of the villagers disclosed that the attacker were herdsmen, who came at about 5 a.m.

NAN reports that the incidence came on the heels of Tuesday's attack on another village in Gwer East Local Government where 16 worshipers including two catholic priests were killed.

A cross section of the villagers confirmed the attack and said people were killed.

According to Mr Shaapera Nyon, he said the attackers came at about 5a.m. while most people were still enjoying the early morning sleep.

He said the residents were awoken by gunshots and the cries of agony from gunshot victims. (NAN)