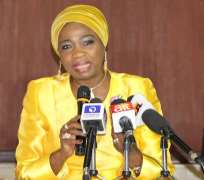 Dabiri-Erewa called on South African authorities to find lasting solution to the incessant killing of Nigerians in that country.

The Senior Special Assistant to the President on Foreign Affairs and Diaspora, Mrs Abike dabiri –Erewa on Monday described the killing of Clement Nwaogu, another Nigerian in Rustenburg, South Africa as unfortunate.

Dabiri-Erewa, in a statement in Abuja condemned the burning of Nwaogu to death by a mob in the latest xenophobia attack in South Africa.

She called on South African authorities to find lasting solution to the incessant killing of Nigerians in that country.

She also urged Nigerians living abroad to obey the laws of countries where they lived, and avoid crime and criminality to avoid unwarranted attacks and killings.

The News Agency of Nigeria (NAN), reports that the killing of the Nwaogu comes less than 10 days after another Nigerian, ThankGod Okoro,30.

The Presidential aide said Rustenburg, where the incident happened was a particularly hostile and a volatile community.

She noted that 14 Nigerians who protested the killing of a fellow citizen in that country North West Province some months ago were still in detention.

She said though a bailable offence, the judge had been threatened not to release them.

“Just a few days ago, on April 17, the case came up in court. There was so much tension that even the Nigerian lawyers representing the Nigerians had to be escorted to court by Diplomatic police.

“The community has vowed to deal with anyone who plays a positive role in getting the accused Nigerians return to Rustenberg,” she said.

She said that the Nigerian mission in Pretoria and the consulate in Johannesburg had done everything possible, in the recent past, to get justice for Nigerians in South Africa.

“Four South African policemen are currently in court for allegedly killing and maltreating Nigerians with embassy officials constantly present in court for the hearings. This is the first time this will be happening.

“However, the early warning signals put in place by the Ministries of Foreign Affairs and Interiors of both countries need to be reviewed.”