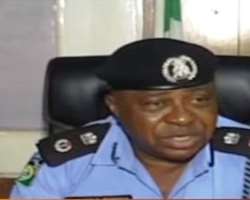 The Borno state police command has confirmed that 3 suicide bombers who attempted to infiltrate Bama town of Bama LGA of Borno state who recently returned as IDPs Returnees back to their home town after years of being at the Dalori IDPs camp in Maiduguri and ever protested their continued stay at the IDPs camp to return to their host communities, was foiled by security operatives.

The PPRO DSP Edet Okon in a statement Tuesday said in quote: "Yesterday being 23/04/18 at about 10pm, three suicide bombers who attempted to infiltrate Bama town through Ajilari area were sighted and challenged by security operatives at guard location.

" The bombers hurriedly detonated the IEDs strapped to their bodies killing themselves only.

" The area has been rendered safe by PMF and EOD personnel of the Nigeria Police Force. Normalcy has also been restored.

"The Commissioner of Police Borno State, CP Damian Chukwu thereby urges residents to go about their lawful activities without fear as the police will continue to do their best to protect lives and properties."