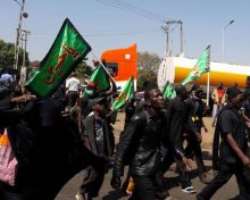 The growing spate of agitations by members of the Islamic Movement in Nigeria (IMN) popularly known as Shiite demanding the release of their leader El-zazaky has claimed another casualty.

The death resulted from their clash with the police in Abuja on Monday.

The victim is believed to be a member of the Shiite group.

The clash was said to have occurred when the police tried to prevent the members of the group from converging.

The police were said to have shot a tear gas to disperse the members of the group, but they refused to yield and resorted to throwing stones.

The death, it was said, resulted from the clash.
According to the News Agency of Nigeria report, the police had on April 16 arrested 115 members of the sect during a violent protest in the territory.

A senior security officer who pleaded anonymity because he was not permitted to talk to journalists, told NAN that the sect members had to be forcefully dispersed after all pleas to leave the area fell on deaf ears.

However, NAN gathered that the sect members engaged the police with stones and other missiles and smashed glasses of some vehicles parked in and around the NHRC building.

They also pelted the police water cannon vehicle deployed to disperse them with stones, wounding some of the policemen, while some of the sect members ran into one of the uncompleted buildings beside the commission.

The police later called for re-enforcement, leading to deployment of more personnel with sniffer dogs to comb the building.

Although the senior officer declined to comment further, NAN gathered that some members of the sect were arrested in connection with the violent protest.

When contacted, the Spokesman of the FCT Police Command, DSP Anjuguri Manzah, said that he had not gotten details of the incident and, therefore, declined further comments.