African feminists and the luxury of madness 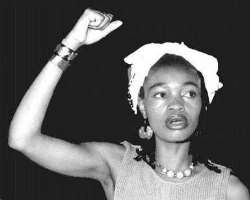 African culture isn't bosom friends with women's rights. Neither is religion a known admirer of ambitious women who demand equality with men. It only requires a bit of emotional blackmail to muscle a female into realising that the male gender is king; the sole head and chief executive officer of the home in a traditional African society.

However, the past few years haven't been entirely comfortable for conservative African men, who are continually "threatened" by the feminist movement, which is fast gaining the interest of more women around the continent.

It is a new wave of enlightenment that aims to disinfect the minds of women against extreme submission to men, as it crusades for gender equality. In fact, to a great number of African men, feminism is "the new mental illness" in sub-Saharan Africa.

African feminism comes with alien demands, like women sharing equal partnership with men in all facets of family life, abolishing male preference in politics, ensuring reproductive rights for women and girls, and recognising the rights of women to hold religious titles without restraint to preside over men.

The feminist movement also criticises all forms of domestic violence (no matter how severe the "provocation"), and frowns upon oppressive cultural practices like: child marriage, female genital mutilation, and most recently, the payment of bride price during marital rites — since of course, the bride shouldn't be for sale.

The proposed emancipation of women in Africa is likely to be a long-term idealistic struggle, as patriarchy eats deep within the social and cultural systems of the African continent. Nonetheless, the women have neither cowered in fright nor lowered their expectations. The "indoctrination" of more women into feminism is on the increase.

Aside from successes in ensuring government's protection of women against sexual/domestic violence and female genital mutilation through favorable laws in several regions in Africa, women have made significant strides in politics as well.

In 2017, Rwandan women reportedly held 62 percent of the country's legislative seats; the highest in the world. In other sub-Saharan countries like South Africa, Senegal and Namibia, more than 40 percent of parliamentary seats are held by women.

Threatened, as expected, by the sudden emergence of women in politics, Nigerian lawmaker Gudaji Kazaure recently had some advise for parliament.

In his words, "It is good to give women opportunities in politics, entrepreneurship, because of the good role they play in our lives. My fear is, the women control the men at home. If you give them too much opportunity outside the house, they will capture everything. If you give them too much chance, one day, they will overthrow us. One day you will come here and find women everywhere in this chamber, and they will mess up."

In a strongly religious and culturally conservative African society, it appears, it "isn't sane" to make demands for gender equality. It "isn't alright" to question the historic gendering of God as male, a belief that informs the idea of "superiority" of men over women. It is "psychotic" to request equal partnership for husband and wife in the African marriage systems.

African women must keep up the fight against gender discrimination, until the "deranged" concept of feminism becomes the new standard of the African society.

• Bio: Nimi Princewill is a writer and social reformer