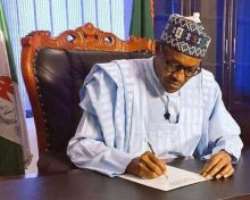 The president's letter, however, has also exposed the lies of a presidential aide who  on April 9 said that Buhari had not ordered the withdrawal of $1 billion from the ECA for the procurement of arms to fight the insurgency in the North-east and would not do so until he had obtained the approval of the National Assembly.

The president's letter, which was obtained exclusively by THISDAY from sources in the House of Representatives, indicated that Buhari only wrote to the National Assembly leadership on April 13, 2018, and it was received in the Office of the Speaker of the House on April 17, 2018.

The letter showed clearly that Buhari had already given anticipatory approval for the withdrawal of the sum of $496,374,470 (N151,394,421,355) from the ECA for the purchase of 12 Tucano aircraft from the U.S. and was seeking the inclusion of same in the 2018 Appropriation Bill that the National Assembly is currently finalising.

In the letter, Buhari explained that the U.S. government had given a payment deadline for the aircraft purchase, otherwise, the contract would lapse.

But this could prove to be a major problem for Buhari and would likely worsen the discord between the executive and the National Assembly, as the legislature last week had summoned the Minister of Finance, Kemi Adeosun, the Central Bank of Nigeria (CBN) governor, Godwin Emefiele, and the Accountant General of the Federation, Mr. Ahmed Idris over the disbursement of the funds for the procurement of the aircraft from the Consolidated Revenue Fund (CRF) without appropriation by the legislature.

Last December, the state governors at a meeting of the National Economic Council had given the president the green light to withdraw $1 billion from the ECA to fight the insurgency.

However, this would have required the approval of the National Assembly and the 36 state Houses of Assembly since the funds in the ECA belong to the three tiers of government.

A few days later on  February 5 , he said the federal government had paid $496 million to the U.S. government for the Tucano aircraft but was silent on the salient fact that the funds had already been withdrawn from the ECA.

The minister did not reveal that Buhari had given approval for the withdrawal of the funds from the ECA until April 4 after a meeting of the Security Council at the State House, Abuja.

It took for the public outcry over the president's approval before the Senior Special Assistant to the President on National Assembly Matters (Senate), Senator Ita Enang on April 9, stated that Buhari had not yet given approval for the withdrawal of the $1 billion from ECA.

Enang had said: “That the said sum has not and cannot be approved for spending by Mr. President. That in accordance with best practices, Mr. President, having received approval of the sum from National Economic Council made up of all the governors, now had a meeting with the Minister of Defence, service chiefs and the Inspector-General of Police, among others, to collate the needs of each of the services and the money available for appropriation.

“Mr. President and the meeting having collated the need of each service and the amount involved may now present same to the Federal Executive Council for detailed consideration, or in the exercise of presidential powers may communicate same to the National Assembly for appropriation.

“As of now, the process of approving the money for use is inchoate and still undergoing executive standard operating procedure before laying same before the National Assembly for appropriation.

“The processes now being worked on is to fast-track these procedures so that it may be forwarded to the National Assembly while it is still considering the 2018 Appropriation Bill (budget) for incorporation as Mr. President's supplementary request under the 2018 budget, or if completed after the 2018 budget, it may be forwarded as a Supplementary Appropriation Bill.

“Succinctly stated, Mr. President has not approved the sum for any release of this procurement or application howsoever, the executive is conscious of the provisions of Section 80 (3) and (4) of the 1999 Constitution which states:

“No moneys shall be withdrawn from the Consolidated Revenue Fund or any other public fund of the Federation, except in the manner prescribed by the National Assembly.

“We are also conscious of the provision of Sections 4 and 5 of the 2017 Appropriation Act (relating to Excess Crude Account) and would not take any action in breach thereof.

“Just as the legislature in processing legislation starts with conceptualising, drafting, scrutiny of the draft, gazetting, first reading, second reading, committal to the appropriate committee, public hearing, consideration of the report by committee of the whole or supply, passage and third reading in plenary, so also does the executive have and maintain standard operating procedures, or due process or due diligence in all actions and at this stage, the matter is undergoing these processes for laying before the National Assembly for appropriation.

“Therefore, the matter of the security fund is still undergoing standard processes, the said sum can only be spent, and in the manner, as shall be approved by the National Assembly, and assented to in the Appropriation Act or Supplementary Appropriation Act.”

But Buhari in his letter to the Speaker, dated April 13, stated: “I wish to draw the attention of the House of Representatives to the ongoing security emergencies in the country. These challenges were discussed with the state governors and subsequently, at the meeting of the National Economic Council on 14th December, 2017, where a resolution was passed, with the Council approving that up to US$1 billion may be released and utilised from the Excess Crude Account to address the situation.

“Subsequent upon this approval, we are preparing a comprehensive schedule of all the requirements for each of the security services for presentation to the National Assembly for consideration.

“In the expectation that the National Assembly would have no objection to the purchase of this highly specialised aircraft, which is critical to national security, I granted anticipatory approval for the release of US$496,374,470.00. This was paid directly to the treasury of the United States Government.

“I am therefore writing, seeking approval of this House for the sum of US$496,374,470.00 (equivalent to N151,394,421,335.00) to be included in the 2018 Appropriation Bill, which the National Assembly is currently finalising. The balance of the requirements for critical operational equipment is still being collated from the different security services and will be presented in the form of a Supplementary Appropriation Bill, in due course.

“The Honourable Minister of Defence and other appropriate officers will be available to provide further details, as may be required.

“While thanking the Honourable Members for the usual cooperation, please be assured Mr. Speaker, the assurance of my highest regards.”

Speaking on the president's letter, some lawmakers in the House confirmed yesterday that this was the reason Adeosun, Emefiele and Idris were summoned last week to appear before the Senate and House to explain the withdrawal of $496 million from the CRF without legislative approval.

One lawmaker who preferred not to be named, also explained that the rush to pay the U.S. government the huge amount, despite Nigeria's rejection of the stringent payments terms for the procurement of the Tucano aircraft, was targeted at being on the right si de of U.S. President Donald Trump before the 2019 general election in Nigeria, hence the invitation extended to Buhari to visit the White House on  April 30 .

“Remember th at the U.S. was quite influential in the 2015 elections. Buhari and his handlers are quite aware of this. They also know that President Trump is a businessman, for him it's 'America First', hence he (Trump) does not have the qualms former President Barack Obama had over the sale of military equipment to Nigeria, despite the allegations of human rights abuses by the Nigerian military.

“For President Trump, he will sign deals with countries willing to buy U.S. military equipment because it creates jobs for defence industries and firms in his country and brings money into the American economy.

“Now, for the Nigerian presidency, it was important that they met the payment deadline, despite the draconian conditions given for the purchase of the aircraft which are not in Nigeria's favour, even by the defence minister's admission.

“This is what secured the invitation for Buhari to the White House and if he plays his cards right, will keep him on the right side of Donald Trump before the Nigerian elections in 2019.

“If Buhari and his handlers get the tacit support of the U.S. as we head into the elections, that would be a major achievement for the APC,” he explained.

However, he noted that whilst many lawmakers were aware of the political reason the president had quickly approved the withdrawal from the ECA and transfer to the U.S. government treasury, their main concern was the fac t that he did it without the approval of the National Assembly as stipulated by the Nigerian Constitution.

“This is a major constitutional breach and that is why Adeosun, Emefiele and Idris have been summoned. It does not bode well for the executive,” he said.

War Jets for Delivery 2020
Meanwhile, the U.S. government said yesterday that it would deliver the 12 Super Tucano fighter jets and other weapons that it agreed to sell to Nigeria to combat Boko Haram terror ists and other extremist groups in 2020.

A senior U.S. Department of State official made the disclosure during a background briefing with journalists at the U.S. Consul General's residence in Ikoyi, Lagos, yesterday.

The official, who confirmed that the Nigerian government had paid for the warplanes, said the sale of the aircraft with weapons and services worth over $400 million included bombs and rockets, reported the News Agency of Nigeria (NAN).

It was learnt that the propeller-flown aircraft with reconnaissance, surveillance and attack capabilities, is made by Brazil's Embraer.

Embraer's second production line is in Florida in a partnership with privately held Sierra Nevada Corp of Sparks, Nevada.

The Super Tucano aircraft are said to cost more than $10 million each but the price could be higher depending on the configuration. They are powered by a Pratt & Whitney Canada PT 6 engines.

On the planned visit by Buhari to the White House on  April 30 , the official said the Nigerian leader would be the first African president to meet Trump.

Trump met with Egyptian president Abdel Fattah Al Sisi and then later with African leaders on the sidelines of the United Nations General Assembly (UNGA) last September in New York.

He has not received any African leader at the White House since he assumed office in January 2017.

“We are excited about the planned visit by President Buhari as the first African leader to be engaged by President Donald Trump at the White House.

“The most important thing is that it is in Washington. It will be a very high-level meeting; it will help the U.S. to also understand Nigeria's projections.

“There will be independent conversations on security, governance, the Lake Chad Basin and Nigeria's role as a democratic leader in the region,” the U.S. government official said.

Commenting on Nigeria's 2019 general election, the official said: “The U.S. will remain non-partisan as it has a commitment to continue to support Nigeria's elections.

“We will continue to help Nigeria's security agencies to build capacity, not only in Nigeria but other countries in Africa,” the State Department official said.

On the Independent National Electoral Commission (INEC), he noted that the electoral umpire had benefited from the U.S. in several ways in ensuring a level playing field for all interested parties.

The official, however, tasked the Nigerian media to be professional in their reports as the 2019 elections get closer.

“The media should be able to inform the public on the processes leading to the election proper; you need to educate the public on the importance of permanent voters' cards (PVC), and this should not be left to INEC alone to handle.

“The media should allow transparency in their relationship with politicians and in carrying out their responsibilities,” he added.