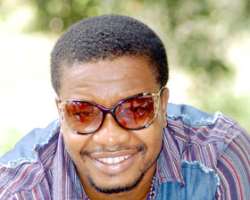 Browny Igboegwu, simply called Browny by friends and relatives is a Public Administration and International Relations graduate who has been in the acting industry for quite awhile. A first look at him will take one's mind back to the ace popular high life/ hip hop singer Paul Play. In this interview, he bares his mind on his career, love life, his award, and his supposed ugliness.
Excerpts:

I have taken my time to look at that guy and I don't see any resemblance. Funny enough, there was a day I was in Orlu and some people bet money to come me ask if I'm Paul Play. I was terribly embarrassed that day.

Acting comes natural to me, but I never dreamt of becoming an actor. I got into it by accident. One day I went to see a friend and within the neighbourhood, they were shooting a movie and he (my friend ) happened to be the one directing the movie…

And what's his name?

His name is Oke Ozubeluoko. Somehow, one guy was mixing up his role and I told my friend I could do better even when I had no experience as an actor. And when my friend asked if I was sure of what I said, I answered in the affirmative. Moment later, I was on the set. It was fun and I enjoyed it. .

Was it a lead role?

No, it was just a scene I did with Hanks Anuku. The movie was titled Expensive Error.

What kind of role did you play?

How did you play the role even though you never acted before. Are a cultist?
(Laughs) Like I said before, I'm naturally born actor.

How many movies have you acted in?

I have acted in more than 60 movies. Right now, I have lost count.
Which movie actually brought you to the lime light?

The movie Marry me…

What was it about?

It was a movie I did with Nonso Diobi and Oge Okoye. Nonso acted as my younger brother and Oge was his girlfriend whose rich father helped the family only because of that.

The movie was produced and directed by Iyke Odife, a man I have a lot of respect for.

Many of your colleagues after acting for a while, turn to production. Are you producing your own movie soon?

I do not really want to get into production. I am basically an actor, and if ever there is anything I want to delve into, it will be directing and that will be basically towards the period I want to retire from the screen.

You are going to retire from acting?

Everyone gets to a point where you need to do something new after doing one for some time. Besides, a time will come when shuttling from one location to another will become boring. So at such times for me, I will fall back into film directing.

What were your parents' reactions when you went into acting?

When I started acting, my father was already late and my mother was not comfortable with it, especially when I started plaiting my hair. She was like, 'ah when did that one start?'

Sometimes, when some girls come to our compound to make my hair, she will be sort of upset. But when it started going well she was forced to start liking it. Even my siblings were like after 'all the years you spent studying in the University, you now want to start acting'. But with time, everybody learnt to let me be.

You continued in spite of those challenges?

I felt it was my calling and my vocation. I also felt the need to pass on messages to the society and to correct some societal ills and misdemeanour. So I was not discouraged at all,. I just forged ahead.

I thank God for where I am today because some of those friends and siblings who felt I should not be acting now came back to me to tell me that I have done them proud.

How do you handle advances from female fans?

When are we expecting the wedding bells to ring?

Don't worry, the wedding bells will ring when it will. When it is time I will invite you..I have kept her identity to myself, that will be my surprise package for everyone.

What kind of a girl attracts you?

My kind of woman is somebody who is not lazy, intelligent, God fearing, generous and honest.

What is your most embarrassing moment?

One guy saw me one day and said my grandmother hates you and he was damn serious. You needed to have seen the look on his face that day. He told me that it was for a role I played in one movie where I played the young Peter Edochie and I was beating my wife mercilessly until she lost her pregnancy and all that. Because of the kind of roles I play, lot of people think I am a bad boy but I am not.

I don't know why they keep giving me bad boy roles and it is affecting me one way or the other because most of our fans watch these movies with all their hearts and they feel like this is exactly what is happening.