Could Russia and other rogue regimes be benefiting from the horrorand misery in Syria? 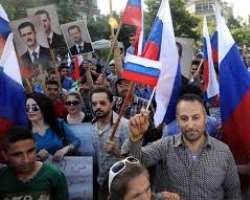 For quite sometime now there had been hostilities in war-torn Syria that have once again escalated the arms race between world's major powers particularly the United States and Russia and this puts the world in a possible jeopardy.

There is no gainsaying the fact that the activities of these two death merchants put humanity in a grave danger as their death machines hang over our heads like the ancient sword of Damocles.

Only recently, Israeli jet fighters flew on a sortie over Iranian military base and carried out massive bombardment of Iranian targets probably to precede a ground attack in retaliation to the downing of Israeli drone by the Iranian military in Israeli airspace.

The United States on its part together with the allied forces battered suspected Syrian chemical weapons sites by a blitz in a strong response to chemical attacks on Syrian civilian population by the Assad's government.

Today, there is no denying the fact that Syria is in ruins with more horrors and miseries on the way as the country remains under regimentation, subjugation, and militarization by foreign military powers.

Russia has times without number played dangerously close to the US forces in the war-torn country which the latter has avoided not because of weakness but to avoid a possible escalation of the crisis on the ground capable of triggering free use of nukes in a possible show of military strength between both countries.

The US has always exercised restraints which some see as a weakness but which others including this writer see otherwise.

Russia has been into some dangerous games by trying to incite other world's powerful military against the United States. In defence of the Assad government over the use of chemical weapons on civilian population recently, Russia said it did not believe biological weapons were used.

Iran followed suit and threatened fire and brimstone in furtherance of the country's anti-America stance.

The question that agitates this writer is: Must the world continue to be at the mercy of Russia and the rogue regime in Tehran?

Russia nuke stockpiles doubtless pose a grave danger to the world so also is the US nuke arsenal. But the latter has never at any point in time threatened other nations with it while Iran that is yet to develop one often threatens to wipe out the 'Zionist' Israel.

Into what dangers would these two rogue states lead the world? The US has never been known to pursue an aggressive foreign policy that could endanger the whole of humanity. Russia and especially Iran has been caught on many occasions in this regard considering its anti-Semitic activities with HAMAS which has launched many attacks on Israel.

Russia on its part has refused to prevail on President Assad to either step down or end the killings in the country. Kremlin says it remains fundamentally opposed to every move to dethrone Assad. What is their reason?

Could Russia and other rogue regimes be benefiting from the horror and misery in Syria? I have a burning desire to know. However, all I crave is a world without weapons and violence.

*Iyoha John Darlington is a social activist, writer, public commentator on national and global issues and until recently the International Media Correspondent of the Green Party of Nigeria.