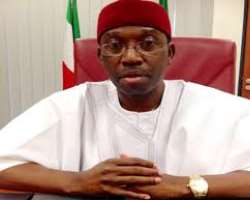 With the ongoing work at the Central hospital in the heart of the Delta State capital, Asaba, residents would soon have a fresh breathe of relief as additional works for the remodeling of the hospital has been approved by the State Executive Council (SEC).

The Commissioner for Information in the state, Chief Patrick Ukah, Tuesday made the disclosure shortly after the State Executive Council meeting in Asaba, said that the works entail the remodeling of the hospital and the redesigning of the Accident and Emergency Unit, theatre and wards.

Also, the Council approved the renaming of Agulu Secondary School, Asaba, to Afadia College, Asaba, “The school was approved by the state government in August, 2017 and now has a student enrolment of 174”, the astute Information Commissioner revealed.

Further approvals by the EXCO include the reactivation of the Airfield Ground Lighting Systems (AGLS) at the Asaba International Airport, Asaba.

Components of the AGLS along with others that have been previously installed but were affected by the reconstruction works require reactivation to enhance flight operations especially with the expected upgrade of the airport on completion of the rehabilitation works.