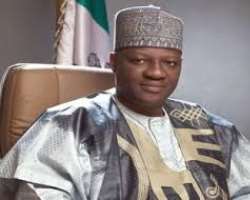 Currently Kwara State is fiscally unstable. The current government has crippled the state with an increasing debt burden that the state cannot service, and chronic arrears in both salaries and pensions. If there were a budgeting financial manager for the state, they would declare the state to be near insolvent. Accordingly, going forward it is imperative that the state implements a solid fiscal plan to rip the state from the edge of the cliff of financial collapse.

With the dire state of finances in Kwara State, it is a shock that there are so many are vying to become the next governor of the state. Either they are totally ignorant of the current financial crisis gripping the state, or are ignorant of what will be required of them to address it, or have no intention of addressing it in accordance with state needs. Not surprisingly, not single person who has been elevated as a candidate (potential candidate) for the states governorship has tabled an economic plan to address the states fiscal deficits. If the people of Kwara want to put the days where salaries are 6 months in arears, and pensions are unpaid, in the rearview, they are going to have to pay much closer attention to the gross deficiencies in the acumen of current aspirants and their lack of a concrete plan to address the states need for money.

#1. Deny Himself & Shoulder His Cross

In-kind of what Jesus says in Matthew 16:24, Luke 9:23, Mark 8:34, if anyone wants to be the next governor of Kwara State, they must first deny themselves daily, shoulder their cross, and as house servant work diligently for the people of the state. The next governor of Kwara State, must be willing to work as governor, without any compensation, salary, allowance, pension, or benefit. They will not be able to dip into the states finances to provide themselves with any of the perks of office that their predecessors enjoyed unless of course they can afford to provide those things for themselves through their own means. Just recently the state borrowed N4 billion simply to clear salaries and pensions. Typically, when a government borrows responsibly, the money is spent on capital projects that generate revenue, like toll bridges, transit systems, and state-owned businesses or loan schemes. Given that paying workers and pensions are not capital investments, the state is obviously broke, too broke for an elected governor to pay themselves anything or to utilize any of the perks of office. For the next governor to actually lead a fiscally responsible state, they must lead by example by denying himself while carrying out duties. Further if the governor (the Oga at the top) is willing to volunteer their time, it is quite likely that they will be able to find special advisers and aides also willing to volunteer and serve with little to no compensation as well.

In the past (& present), the disposition of the leadership has been to pay themselves while leaving the masses to suffer and to be paid last. The new leader has to turn this disgraceful conduct on its head, and make themselves the last to receive anything. This will save the state a tremendous amount of money if this statehouse wastes can be channeled toward plugging the fiscal holes, servicing debts, and ensuring that state workers and pensioners are adequately and properly taken care of without irresponsible and unsustainable borrowing. The current administration has repeatedly asked for permission to borrow even more than they currently have, which thankfully has so far been refused. This borrowing is basically a dirty band aid being used temporarily to hide a gaping wound. Going into elections, this type of behavior is likely to continue at an even more alarming clip. This will make taking over governance in the state, financially more difficult than ever before.

While there have been some improvements in Kwara State internal revenue, the state still ranks relatively low on internally generated revenue nationwide. The policy of not introducing new schemes to generate more revenue has clearly been a colossal failure (hence all the new borrowing). The no new tax policy should be scuttled within the first day of office. Nigeria ranks at 6% tax to GDP ratio, one of the lowest ratio’s in the world. Kwara State is likely collecting even less than this. With all the new borrowing, the state must generate new revenue and introduce new schemes. It cannot rely solely on finally enforcing existing laws. There are a number of new measures that previous administrations should have undertaken to rectify the states fiscal imbalances that are yet to be done. For sake of this article I contained just 4 examples below (which is unfortunately is more than anyone who has claimed they want to be the states next governor has done):

Ultimately the people of Kwara State have to understand that they deserve better and that they can have better if they collectively call for it. Ongoing right now is the usual bribing of traditional leaders and community groups, and pathetic disingenuous handouts that failed, unaccountable, and unqualified political elites give around election time. If the people of the state want the past to continue to repeat itself, they can participate and accept this token patronage and sell their future and that of their children in exchange for it. However if enough people believe that Kwara Must Change, it is incumbent on them, more so now than ever, to join hands together and forge the future the state needs. No political elite without a plan, without policies, can step in and achieve those ends. The days where the state could afford to have personalities and those with connections as leaders are long gone. Moving forward, only the right policies (which should be stated in the agenda of every candidate) can transform and rescue Kwara State.