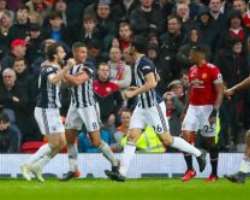 Needing a win to keep their already slim chances of overhauling City, United slumped to a sorry defeat in the rain, with Jay Rodriguez's 73rd minute strike proving a lifeline to the relegation-threatened Baggies.

The win, only their fourth of the season, still leaves West Brom nine points adrift of safety.

Jose Mourinho's side had prevented their neighbours winning the title with a 3-2 win at the Etihad last weekend, but after City beat Tottenham 3-1 on Saturday evening, United needed to win to prevent their cross-city rivals from being crowned champions.

However, United were second-best all afternoon and Darren Moore's men earned their reward for a spirited display thanks to Jay Rodriguez's close-range header 17 minutes from time.

Romelu Lukaku was twice denied by smart saves from Ben Foster, while Jesse Lingard also came close after his introduction from the bench at half-time.

The hosts threw everything at West Brom in the closing stages, but were unable to find a breakthrough that would have delayed City's title confirmation until at least Wednesday when United take on Bournemouth.

Victory for West Brom moves them up to 24 points, but they remain nine away from safety with just four games remaining.

Not for the first time this season at Old Trafford United started sluggishly and could have been a goal down after 12 minutes.

Ander Herrera had his pocket picked midway through his own half by Rodriguez before the ball was rolled into the path of Jake Livermore. The England midfielder's effort lacked venom, though, and was parried to safety by David de Gea.

Herrera had a penalty appeal waved away after seemingly being tripped by Craig Dawson, while Lukaku's powerful drive from Juan Mata's through ball was kept out by the face of Foster.

United's insipid half was then summed up when Paul Pogba received a yellow card for inexplicably trying to convert a deep cross with his hand.

Lingard replaced Herrera at the interval and the new man almost made an immediate impact with a fierce goal-bound drive that was bravely blocked by Dawson.

Mata sliced wide from just outside the penalty area before the ineffective Pogba was hauled off for Anthony Martial just before the hour in a desperate attempt to inject some spark into United's lifeless attack.

Lukaku must have thought he had broken the deadlock after 65 minutes but former United goalkeeper Foster got down superbly to repel the Belgian's powerful header from Nemanja Matic's cross.

And the importance of that save was brought into sharp focus eight minutes later as Rodriguez stole in unmarked to nod in Matic's wayward header from a corner.

United pushed numbers forward in the closing stages, but Foster never really looked in danger of being tested again as United succumbed to a defeat that was celebrated by the blue half of Manchester with even more vigour than usual.

City now sit 16 points clear in top spot with five games to play and could yet to break various Premier League records by the end of the season, with the 100-point mark within their sights.

Guardiola failed to win a trophy during his first season in English football but has now added the Premier League to the EFL Cup crown collected against Arsenal in February.

It is City's fifth English top-flight title, their last Premier League triumph having come in the 2013-14 season.