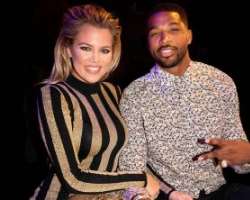 Kardashian  has welcomed a baby girl with basketball player Tristan Thompson, according to multiple outlets .

The reality TV star reportedly delivered her first child on Thursday morning near Cleveland, where she spends some of her time to be closer to Thompson, a center with theCleveland Cavaliers.

Thompson, mother Kris Jenner, sisters Kim and Kourtney Kardashian, as well as best friend Malika Haqq, were by Khloe's side when she gave birth, according to TMZ.

The baby's arrival comes just days after several videos surfaced in which Thompson was allegedly caught cheating while Khloe was pregnant . Footage from a Washington, D.C., nightclub in October shows the NBA star kissing multiple women, while another shows him getting close to a different woman.

Neither Thompson nor Khloe has responded to the videos.

Both Kim and Kylie  recently welcomed daughters of their own , Chicago and Stormi, as the KarJenner family continues to expand.

“My baby shower was unbelievable, magical, everything I could have dreamed of and more!!!” Khloe shared on her  website  after the celebration. “We felt so much LOVE from everyone and it is a day I know Tristan and I will never forget. I'm still dreaming.