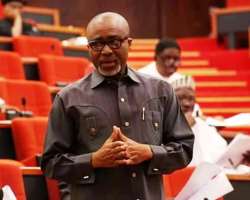 The Senate became rowdy on Thursday after the President was called ‘incompetent’ over his failure to address the spate of killings by herdsmen.

The lawmaker representing the Abia South Senatorial District, Senator Enyinnaya Abaribe, started the event that led to a sharp division between members of the ruling All Progressives Congress (APC) and the opposition Peoples Democratic Party (PDP).

He had raised a point of order to make reference to the conflicting reasons given by officials in the Buhari-led administration for herdsmen-farmers clashes.

Abaribe noted that the latest was from Buhari, who said in the United Kingdom on Wednesday that the killer herdsmen were from Libya.

He said, “A few days ago in this chamber, we talked about the security of Nigeria. This chamber discussed the question of killings in several states of Nigeria.

“I recall that on the matter of herdsmen versus farmers, two explanations were given by highly ranked security personnel in Nigeria. The Inspector-General of Police said these killings were as a result of (anti-open grazing) laws being passed by states.

“Also, the Defence Minister said these killings were also as a result of the blockage of routes through which the herders moved their cattle.”

Abaribe said Buhari on Wednesday in London said the killings were by the people who were trained by the Libyan Leader, late Muammar Ghaddafi, “implying that these killers are from outside Nigeria.”

He said, “When a Commander-in-Chief says he cannot handle invaders invading Nigeria, why is he still a Commander-in-Chief? Why do we still continue to indulge this President that, everywhere, goes about to tell everybody outside this country that he is totally incompetent?”

The Majority Leader, Senator Ahmad Lawan, interrupted Abaribe, asking the lawmaker to withdraw his derogatory comments on Buhari and apologise.

Both the APC and PDP members in the chamber started supporting their men with the cry of, ‘Yes and No.’

President of the Senate, Bukola Saraki, however, upheld Lawan’s point.

“We can make our points without using words that are offensive,” he said

Abaribe said, “There are words with no alternatives. What I did was to interpret the words by Mr. President in London. And I juxtaposed them with the explanations made earlier. What this tells me is that there is a conflict…”

Saraki, again, interrupted Abaribe, noting that certain words were derogatory and would not be allowed in the chamber.

Abaribe continued, “If any word used was misunderstood, I apologise. All I am saying is simple: the heads of security in Nigeria made several different explanations on the killings of our citizens.”

The Deputy Majority Leader, Senator Bala Ibn Na’Allah, also interrupted Abaribe with a point of order, noting that lawmakers could not raise matters relating to the conduct and performance of the officials in the three arms of government, except through a motion.

Saraki ruled that Na’Allah’s point of order was sustained.