The Shame of an African Giant:: The Case of Nigeria's Suppression of Civil Rights in Ogoni 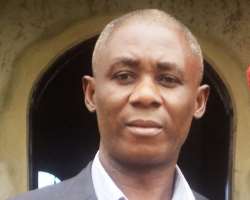 At the inception of this administration, I had anticipated some relief for the Ogoni people not only because the new president had during his campaign pledged to implement the clean-up of Ogoniland but I had expected that the clean-up will open discussions on crucial issues affecting the Ogoni people especially the issue of the political rights to self determination.

I had hopes that president Buhari's integrity, based on what I had heard about him and his uprightness, will not be compromised and was actually optimistic of a renewed commitment to resolve the Ogoni problem.

I was sure that president Buhari understood that in over 30 years of oil exploration in Ogoniland, an estimated $81 billion dollars had been generated from the area, excluding the huge gas potentials of the area, the revenue from the two seaports, two refineries, a petro-chemical complex and two power stations in the area.

I was equally sure that the president new that the Ogoni region from where the revenue that has built his own Katsina state, the Abuja where he lives and the beautiful places that make us proud of our country, had no water electricity, roads, and the dominant councils in the Ogoni region only budgeted about $15 million annually, just about what is generated from Ogoni in two days. Revenue from the rest of the remaining 363 days in the year where shared among Nigeria''s 36 states and administered by their governors as they wish.

The lessons from Ogoni clearly shows how much injustice is pervasive in our country. The shame is that rather than address these injustices, our country and our government has attempted to deceive the world about the true situation in Ogoniland.

Today in my Ogoniland, some villages bury as much as 13 persons in a week. When you relate this to some parts of our country, Imo state for instance, where you do not hear of deaths in one year except for very old people, you will appreciate the reality of the danger faced by the Ogoni people. Nigeria seemingly does not care about this but still furiously going after the Ogoni oil.

Our country seem not bothered about its reputation as one expected to provide leadership in the sub-region. As we speak, our country, Nigeria, still acts like one who does not use his conscience, contemplating the resumption of oil production in an Ogoniland full of working corpses called humans. Nigeria's primary interest is the Ogoni oil and not the safety and future of the people.

It is unfortunate that despite the outrage of the 1995 hangings and the controversial death of four chiefs in 1994, Nigeria is still not committed to doing the right thing in Ogoniland.

In their usual manner characterizing a fantastically discriminatory society, the government speak of oil resumption and not the freedom from discrimination which Ogoni seek. The government focuses on lobbying chiefs and politicians who are on its payroll and not the future of the Ogoni people. While the Ogoni people are calling for respect for political rights which will allow the Ogoni function within Nigeria as a distinct ethnic group, which it is, the government canvasses the people to accept its current slave status where its resources are being used to build cities and nothing comes back to Ogoniland..

The Ogoni people have become slaves in their own country, a realization that has prompted what has become known as the "Ogoni Struggle and led by the Movement for the Survival of the Ogoni People, MOSOP. Wittingly, the Ogoni people had presented a shopping list to the federal government of Nigeria noting that the Ogoni people want to control their own affairs.

Government response had been brutal, a deliberate neglect of the Ogoni region to force poverty on the people and hoping to compel the call for oil resumption in the land. That had been the attitude of a Nigeria where human rights mean little or nothing. Where the government only show strength against a peaceful and legitimate demand for fairness while it look for negotiators to intervene in cases of people who take up arms against the state like the cases of Boko Haram and the Niger Delta militants.

While the Nigerian government has appeared helpless in dealing with terrorists whom it has nicknamed herders, the armed forces display unusual dexterity of a strong army each time it is deployed against peaceful and non-violent Ogonis.

If Nigeria could be so skillful in dealing with Boko Haram, the same way it has done against civilian protestors in Ogoni, Nigeria would long have overcome its security challenges.

It is indeed a shame that our country's strength can only be seen against an oil producing community whom it has unfairly exploited to death and in demanding for social justice has peacefully, non-violently protested this exploitation.

What Nigeria has done to the Ogoni shows that it has become a country that has lost its humanity. If Nigeria will succeed and return to the path of prosperity, it must end the discrimination and unfair exploitation of its own people. Our country must be built on social justice. In this regard, Ogonis must be respected and treated as Nigerians with equal rights with the rest of Nigeria..

The answer lies in the words of Ken Saro-Wiwa: An Ogoni State is not negotiable. An Ogoni state will indeed deliver social equality and justice for the Ogoni people, allowing the oil producing region the right to participate in Nigeria's democracy as Ogoni people and allowing the Ogonis set their own priorities and developmental needs.

Nigeria and its government must realize that a distressed child will not stop crying because of a heavy use of the cane, he or she will stop crying when you show love and address his/her demands.

Ogoni will not surrender to an oppressive Nigeria, we will remain defiant, courageously confronting Nigeria's discriminatory policies, laws and practices until justice is delivered.

The author, Fegalo Nsuke is the Publicity Secretary of the Movement for the Survival of the Ogoni People (MOSOP). He wrote from Port Harcourt, Nigeria.