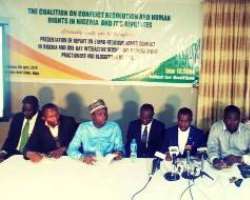 The Coalition on Conflict Resolution and Human Rights in Nigeria has released a complete review of incidents of farmers/herders crisis in Nigeria, lauding the neutral conduct of the Nigerian Army as patriotic and professional.

It however cautioned that situations where political office holders fail to take appropriate actions to maintain peace in their domain only to start inviting the military and at the same throwing tantrums at such institution is not only callous, wicked and senseless but should be stopped with immediate effect to enable genuine stakeholders work together for the peace and unity of the country.

The Coalition at a joint parley between online newspapers and social media influencers held in Abuja on Monday, said it had tracked violence related to herdsmen/farmers clashes across Nigeria and is of the opinion that the crisis was left to escalate because Governors ot Benue and Taraba States have decided to play politics with human lives using armed militias and warlords to escalate the crisis unabated.

The gathering also noted some politicians found wanting in their obligations to their citizens have seen the situation as a cash cow to further exploit the people rather than take steps to mitigate the crisis in order to derive both political and financial benefits.

According to the human rights group, this much was derived after a careful analysis of the situation using surveys, questionnaires and interviews with critical stakeholders, as well as victims.

Barrister Maxwell Gowon, leader of the coalition in the report said it was observed that the dynamics of this crisis are poorly understood by a wider spectrum of stakeholders, which has impacted support for initiatives aimed at solving the problem.

His words, “The Coalition therefore embarked on a review of the clashes with a view to making interventions that will spur rapid resolution of the crisis so that life can again return to normal for the millions of people that have been negatively affected.

“In the course of this review, the Coalition’s researchers visited some selected affected communities in Benue, Taraba, Plateau, Adamawa, Kogi and Nasarawa states. These states were selected using heat maps developed from interactively plotting reported incidents against locations on the map. The selected states, with the exception of Nasarawa, were chosen because they recorded the highest number and most intense level of violence in the 18 months that were assessed.

“Researchers also polled officers of the military and security agencies that have been deployed in the crisis areas. Questionnaires were distributed; interviews were conducted, as well as surveys.

From its findings, the group said the outcome of the review revealed that since its deployment to address the crisis, the military has made commendable efforts at restoring order as it has arrested and neutralized some of the criminal elements unleashing mayhem on affected communities.

The report says, “This is being carried out without any sentiment by the Nigerian military and in a few instances the government forces were not spared by criminal elements. For example, the Chief of Army Staff, Lt Gen. Tukur Buratai at an address on the deployment of troops to crisis areas said "We have deployed officers across Benue, Taraba and Nasarawa states where to ensure peace and stability for the development and betterment of our country."

On the allegation that troops were conniving with criminal elements and the presidency has refused to act was investigated, the coalition said its finding revealed that only criminal elements and their agents in power who nurse the ambition of using the military for personal duties and were rebuffed nurse such conspiracy theories in their reasoning.

“This is not only worrisome but must be discarded to avoid returning to the military to its old nature where some highly placed citizens could press the trigger from the comfort of their homes.

“The deployment of the military to these troubled zones has helped to restore normalcy to most of the affected communities even though the question of armed militias is yet to be addressed with the needed political will and courage from actors within this locality.

Our investigations also noted that most of these militias had been armed by some highly placed individuals and efforts by the Nigerian Army to mop up these arms from them have not received the needed cooperation.

“The crisis between herdsmen and Farmers in some instances is instigated by persons without stakes on either side of the divide between herders and farmers. Unrelated hostilities between warring communities are also passed off as attacks by armed herdsmen. There was an instance in Benue State at Omusu where a clear case of conflict between Omusus and Okana communities in Okpokwu Local Government Area was reported as "armed herdsmen attack" even when it has nothing to do with an existing conflict between Omusu community and herdsmen.

“There are active attempts to mislead Nigerians, the Federal Government and the international community into believing that “killer” herdsmen are out to wipe out other ethnic groups when in some cases ethnic warlords are instigating militias to carry out attacks on their perceived enemies and make same look like the work of armed herdsmen. These actors in their desperate outings have gone further to link the Nigerian military with such heinous actions. However, our investigations have confirmed otherwise and it’s imperative for Nigerians and the world to take note. “

The group further commended the Army for extending the exercise in some states however added that such extension should be granted in more states until ethnic warlords and criminal elements decide to embrace peaceful approaches towards resolving the crisis.

The Coalition also warned that some actors have taken undue advantage of the situation to further their ethnic interest above the national interest which citizens should pursue, urging such persons to retrace their steps if not be ready to face the appropriate international instruments.