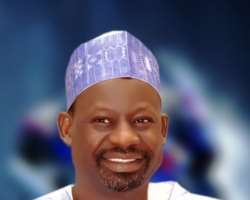 Governor Ibrahim Hassan Dankwambo's tireless work speaks for itself. With his public service record, vying for the governorship in Gombe was no surprise.

The governor voluntarily ended his federal service to go home to Gombe and lead the transformation of the state. As Governor Dankwambo celebrates his birthday today, we are proud to acknowledge how much his leadership has exceeded the expectations of the people of Gombe. Governor Ibrahim Dankwambo believes that investing in human capital and education will change Gombe state. This has been his strategy in transforming Gombe. This transformation has attracted investors who believe in the potential of the state. Gov Dankwambo has changed the face of education in the state.

The pass rate in national exams increased to 26% from a meagre 1% in 2011. His administration renovated dilapidated schools to improve the learning environment for Gombe students. New schools including those for Almajiri children have reduced the number of children begging on the streets of Gombe. He has also established several tertiary institutions that bring higher education closer to the people of Gombe state. The College of Nursing and Midwifery in Dukku, the state Polytechnic in Bajoga, the College of Education in Billiri etc. are just a few examples. Socio-economic development has not been left behind as Governor Dankwambo pursued education.

Dankwambo has built nearly 3000kms of road within the state. He has also linked several isolated communities with the rest of the state via bridges. A large parking bay built for the tankers that flock to the state has also helped to reduce the menace of tankers parking on roads. And has removed the safety hazard they pose to road users within the state. Gov Dankwambo also built a world-class International Event Centre that could host conferences, rallies, shows and more.

This event centre will serve the needs of people now trooping into Gombe state. Building a groundnut processing mill which will employ more than 4,000 people is part of the Governor's economic drive. Gov Dankwambo believes empowering women will lift many communities out of poverty.

This is why he supports several initiatives such as providing loans for small businesses owned by women and others. Tackling insurgents as a state in the Northeast has not been easy but Governor Ibrahim Dankwambo has managed to do that. Turning Gombe state into a beacon of hope in his region. Lighting up Gombe has reduced criminal activities in the state at night.

Criminals are now unable to commit crimes as the police are better equipped to do their jobs better. Governor Dankwambo is committed to the development of the people of Gombe state. His achievements speak for itself and will continue to do so long after his tenure as Governor is over. Gombe state is in a better shape than he met it!