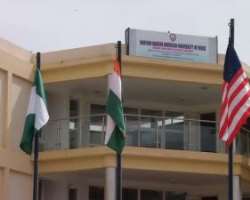 No fewer than 480 students including, Mustapha, the youngest son of late Head of State, Gen. Sani Abacha, have graduated from the Maryam Abacha American University (MAAUN), Maradi in Niger Republic.

The President and Founder of the university, Dr Adamu Abubakar-Gwarzo, gave the figure at the 2nd convocation of the Institution at the weekend.

According to the founder, the institution has also graduated the first set of postgraduate students who were awarded master's degrees in various fields of study.

Abubakar-Gwarzo said that the university, established in 2013, had witnessed phenomenal growth and achievements.

He said that the strides earned the university recognition by world education bodies such as UNESCO, United Kingdom based Accreditation Service for International Schools, Colleges and Universities (ASIC), and U.S.- based Council for Higher Education Accreditation (CHEA).

In his address, the President of Niger Republic, Mahamadou Issoufou, represented by the Governor of Maradi, Dr Zakar Oumarou, commended the foresight of the Founder of MAAUN.

He said that the establishment of the university in Niger premised the beginning of a quantum leap in education standards in the country.

The president urged the founder to sustain the tempo of investment in education, adding that the government of Niger would continue to partner with MAAUN for the growth of education in the country.

The Wife of the late Head of State, and Chairperson of MAAUN's Board of Trustees, Hajiya Maryam Abacha, urged the graduands to be good ambassadors of the institution.

She wished them brighter future.
The Pro-Chancellor of the university and former Governor of Sokoto State, Sen. Aliyu Wammako, promised to sustain the tempo of development in the university.

Wammako attributed the achievements of the university to its commitment to education development. (NAN)